I believe I have found a new favorite writer. His name is Greg Egan and he writes science fiction so hard you can’t consume it in hasty bites least you want to break your mind’s teeth on it. You have to take it in slowly, and suck on the wonderful imaginary science lectures within savoring the cleverness and the amount of detail it contains.

You probably know my list of go-to authors by now: Stross, Vinge, Stephenson, Dukaj. I’m going to tentatively add Egan to this group. Tentatively not because he doesn’t fit in, but because I have only read one book of his so far. So as far as I know Diaspora might be a wonderful fluke – a one time flight of fancy, preceded and followed by mundane and boring body of work. It certainly doesn’t seem this would be the case, as I already ordered few of his other books but I guess only time will tell.

Diaspora is absolutely wonderful. It is one of the most entertaining books I have read in quite a while… Which you probably wouldn’t be able to tell from Amazon reviews, many of which are rather negative. Why, you may ask? Well, to be completely honest the book doesn’t really have strong characters and the plot is a little bit muddled. There is really no antagonist, and the plot is mostly driven forward by the desire of a few characters to solve a scientific puzzle. 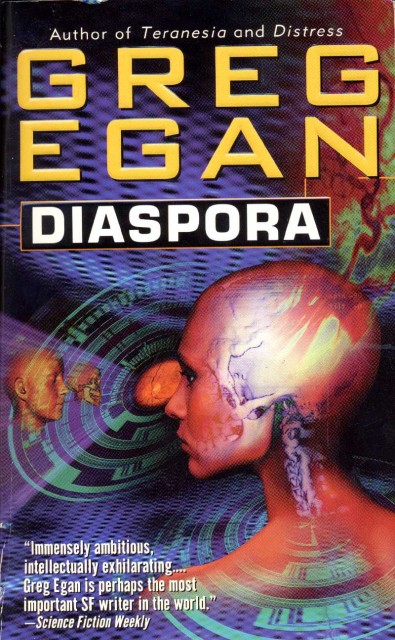 Let me set the stage for you: it is a semi-distant future. Most of earth’s population currently exists as software constructs living in what is know as “polises”. Each polis is essentially a computing space governed by its own charter and shared set of values agreed upon by its citizens. They are all networked together of course, and citizens are free to visit “scapes” (eg. shared virtual forums or meeting places) that are hosted in other polises or immigrate and re-host themselves at will. It really works like one big internet so you home polis is mostly just a matter of preference and personal taste. For example the Carter-Zimerman polis citizens like to think they exist as part of the physical world outside and like to feel rooted in the realities of that universe therefore their public spaces usually have collision detection so people can touch and bump into each other. They also usually pick a gender and make it part of their identity. The Konishi polis on the other hand are big on personal autonomy so their icons/avatars in public spaces pass through each other like ghosts and tapping someone on the shoulder to get their attention would be considered a gross violation of physical space. They also are genderless as they do not think keeping with the ancestral sexual dimorphism should have any relevance for asexually reproducing citizens who are in essence pure software.

The first chapter of the book actually depicts a process during which one of the main protagonists achieves sentience. It is actually quite remarkable and it shows Egan actually knows a thing or two about software. He essentially describes a budding of a neural network from a primitive deterministic seed into full sentience. I have never read anything like it and this is probably the best, most technically accurate and probably the most poetic description of a self organizing system achieving self awareness you can find in literature right now. It is probably worth picking up this book just for that.

Note that this part is only the introductory chapter, but in a brilliant masterstroke Egan is able to dump a lot of exposition. He introduces the protagonist who initially acts as the “fish out of water” reader surrogate learning about the polises and their history. We not only learn about that character and what drives him/her (Yatima is actually genderless) but about the universe itself. For example that outside of the polises there also exist enclaves of “fleshers” (ie. humans who rejected the “introdus” and chose to live in physical bodies) and gleisners (think moravecs from Illium by Dan Simmons) who left Earth and explore the solar system and the stars in robust mechanical bodies.

Then one day a gamma ray burst that no one was able to predict wipes out most of organic life on Earth. Carter-Zimmerman polis citizens are so shaken by the freak astronomical incident that they decide to mount a “diaspora” and seed the galaxy with copies of the polis hoping to ensure continuation of intelligent life, preservation of Earths’ legacy and also as means of exploring and understanding the universe as to avoid future incidents like the one which has transpired.

What do they find out there? Traces of life actually – some of which is so different from Earth based life it forces them to re-evaluate what they consider living beings. Also traces of intelligent aliens who have left behind some sign posts and keys to another universe entirely. One which has five spatial dimensions (to our three) and radically different laws of physics.

It is all written with painstaking attention to detail. Egan has background both in computer science an physics and it shows. If an author gets software and technology it is usually enough to win me over. But Egan doesn’t just pull stuff out of his ass. When he imagines an alien universe he does it from ground up – he starts with elementary particles (quarks, gluons, bosons, etc) and builds it up from there. A lot of the story revolves around the characters discussing scientific theories, testing their ideas, arguing about results or explaining things to each other. It’s kinda like Stephenson’s Anathem in which a lat of time is spent on formal dialogues about philosophy and science – but cranked up to eleven.

Personally, I live for this shit. I actually absolutely love this sort of thick, hard science lecture type stuff that at times is at the edge of my understanding. If I have to put down the book for a bit to Wikipedia advanced quantum physics concepts to wrap my head around what is going on in the story, then the author accomplished something – he taught me something new. He forced me to better myself and that’s always a positive thing. But alas not everyone likes to be befuddled by science. Some folks want to have a human element in their stories, and Diaspora is a bit lacking in that department. Granted it didn’t bother me at all, because unlocking the quantum secrets of the universe in a really clever thought experiment seems much more exciting than wondering weather two fictional characters will get it on or not.

Diaspora is hard SF at it’s best and I highly recommend it. Two thumbs up, seal of approval and a big endorsement. But approach with caution if you get annoyed if your novels suddenly turn into impromptu physics lectures. Cause that happens a lot, and it is very awesome if you are into it.

This entry was posted in literature and tagged greg egan, review, sf. Bookmark the permalink.


7 Responses to Diaspora by Greg Egan