Up until few days ago, I used to completely dismiss the whole “PC gaming is dying” idea. It seemed ridiculous to me. Few years ago I even wrote a lengthy post on why I think it is not the case. And for all intents and purposes what I said back then was probably still true… But a lot has changed in the last 3 years – with the exception of my ideas about PC gaming. I just never bothered to revise them. I was stubbornly clinging to the idea that the PC gaming market is still as strong as ever was.

Then I saw this video:

Initially I wanted to write an angry rebuttal, trashing his video but the more I pondered it, the more I was convinced that Movie Bob is right. As you can probably tell, I’m not very happy about it but what he says can’t be easily dismissed. The computing environment has changed quite dramatically the last 3-4 years.

High School through College my friends always had better gaming PC’s than me. I was never an early adopter, and I was never particularly wealthy, so this was just something that happened naturally. I was always a generation behind. But recently, the situation reversed itself – now I happen to be the one with the best gaming PC. And my machine is not that new anymore. What is going on here? Oh, right… I simply happen to be the only person out of my friends with a gaming PC, and so I’m winning by default. Everyone else have jumped ship few years ago, and now use a combination of a high end laptop (usually a Mac Book Pro) and a console (usually Xbox). Few who still dabble in PC gaming usually just to WoW, which is not that resource intensive. That says something, no?

Maybe not. This is purely anecdotal evidence after all. But it does ring true, right? If you think about your friends and family members, how many of them bought new desktop computers last year? People just don’t buy the big beige boxes the way they used to. Back in 2009 Reuters reported that laptop sales officially overtook desktop sales in US across all platform. But the trend was there for several years before that.

For some companies, this happened way earlier. For example, here is a graphic that Apple released last year, showing percentage sales of their desktop and portable lines over the last 10 years: 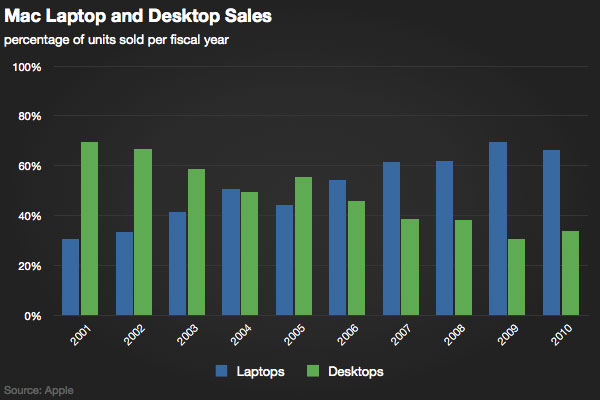 As you can see, for them the game changing year was 2006. That’s when their sales numbers flipped. 2010 on the other hand is almost an exact mirror image of 2001 with the 80/20 ratios reversed. I’m pretty sure most companies can produce charts with a similar pattern. So this is not just me and my group of friends. This trend is nation wide, and probably even global.

People just don’t want PC’s anymore – gaming or otherwise. They are simply not buying them. Rather than dropping 3k on a high end gaming rig, they buy a nice laptop a console and a smart phone instead. Granted, you can buy a pretty decent portable gaming machines these days, but they are not as powerful as a stationary box could be for the same price. And I bet most people don’t use them for hard core gaming anyway. Companies see these charts, look at the sales numbers and adjust their policies accordingly.

This is probably why most video games these days ship with horrible console friendly UI. They could easily redesign the interface for the PC port, but… Why bother. While there are still a lot of PC gamers out there and it would be silly not to sell games to them, they are clearly not the main source of income. They are a smaller market compared to the console gamers. I assume that a lot of publishing houses simply don’t think they would get a return on the investment required to design a PC interface for their game from scratch.

Even Valve which was the last great PC-centric company has seen the writing on the wall. While they are not jumping ship yet, it is clear they are maneuvering to position themselves in preparation for such jump in the future. Firstly, they ported a lot of their games to the Apple platform. What does that say? Well, they probably noticed that nowadays it is much, much more likely for an average teenage boy to own a Mac than a tricked-out custom box, or an alienware rig. So they are delivering their older games (thus less resource intensive, laptop friendly products) on a platform that is becoming increasingly popular, and mostly ignored by most game publishers. Valve is positioned to become the primary game publisher for Macs.

Secondly, they are bringing Steam to Playstation, which shows that… Well, you probably know exactly what it means. They are breaking into console market now, because that’s the future. They are basically putting their leg in the door, so they can slowly start switching focus to the new gaming platforms over the next decade or two.

But, have no fear, there is a silver lining here. The death of PC gaming does not necessarily mean the death of PC games. Why? Because the PC platform is still going to be around for a while. And while it is still around, there will always be some demand for games.

Let me give you an example: have you ever tried to do some actual work on an iPad or a super-small notebook computer? If you did, you know that it is just not hat comfortable. It’s not really about hardware or software – it is more about the form factor. When you are doing any kind of serious work, nothing beats a traditional desktop type setup: a desk, a comfortable chair, an ergonomic keyboard and mouse, and a big monitor or two.

Please keep in mind that when I say work, I don’t mean your day job. I mean stuff that you actually like doing: hobby programming, graphical design, creative writing, web design, etc… Granted, you probably don’t need a big bulky desktop for most of that stuff. But a desk with a docking station for your portable computer goes a long way. So even if desktops go the way of the Dodo, there will still be legions of people out there with pretty capable portable PC’s and Macs, who wouldn’t mind playing some games on their machines.

So the platform is not going to die. You just won’t be able to assume that all potential PC gamers have top of the line machines anymore since they will more likely have mid range laptops and portable. Fortunately, consoles happen to have fixed hardware and relatively long life cycle. This means that most people will be able to afford a machine as powerful as the current gen console a year or two after the launch. Since the PC’s will always have ample time to catch up with the consoles in terms of hardware, this will open them up as a viable video game market. I’m fairly confident that this will keep PC platform relevant enough to warrant ports of all major triple A titles at least for another decade. Granted, we will probably get shafted with crappy, and we may need to invest in an X-Box controller at some point. We probably won’t run out of games any time soon though.

Coincidentally, death of PC gaming may mean the end of the graphical fidelity race that has been consuming the video game industry for many years now. With fixed hardware platforms dominating the market, there is a chance that developers will now shift their focus from bump shading techniques to game play, and storytelling. So this may not actually be such a bad thing.

Finally, as all major developers switch their focus to consoles, a smaller, less lucrative PC market will become a playground for experimental projects and indy games. This month’s boring sequel of yet another brownish FPS may not cross over to the PC but we will definitely see more cool little games like Amnesia. And I’m actually fine with that.

What do you think?


14 Responses to So PC Gaming is Really Dying, Eh?