Quick confession: I have never played actual D&D. I played quite a few other things, but D&D and AD&D have always somehow evaded me. I knew a lot about these systems. I would often scan through their adventures and modules in magazines (you know, back when they would actually print and sell RPG related magazines on dead trees – those were the good times). To this day I always like to page through D&D monster manuals when I see them in a hobby store. They always have awesome pictures and awesomely ridiculous monsters. The old versions had the best creatures though – like the dreaded Duckbunny.

The one thing that everyone seems to know about D&D, regardless of whether they have played it or not is the alignment chart. Now, correct me if I’m wrong, but I think the latest and greatest edition changed the way the alignments work recently. Is that correct? I’m not sure how they work now, but I want to talk about the classic two axis chart: law vs chaos and good vs evil. If you have no clue what I’m talking about, let me explain this to you via a picture. This is essentially what the D&D alignment boils down to: 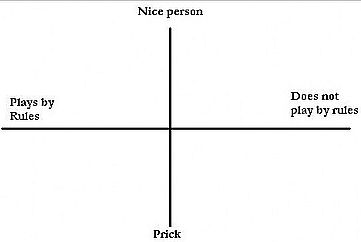 Bassic idea behind the alignments

The X axis represents your attitude towards law and order. If you always play by the rules, and do things by the book, you fall to the left of the chart. The Y axis is concerned with your general morality – whether you go out of your way to help people, or whether you take pleasure in actually hurting others. Combine the two and you get a shorthand for describing a wide variety of characters. For example, Robin Hood is a quintessential Chaotic Good character because while he breaks the law, and robs rich people, he does this to help the poor and the downtrodden. So his heart is in the right place, even if his methods are questionable. Similarly Conan the Barbarian or Han Solo would probably be smack dab in the middle, classified as a True Neutrals because they are mostly self-serving anti-heroes. They don’t care about breaking the laws of men, and they don’t do anything that does not benefit them. Of course it could be argued that Han Solo moves to the Neutral Good territory at the end of New Hope – but I guess that’s just character development.

I must admit that I love this little system – it is a really helpful tool that lets you pinpoint what your character is supposed to be all about. In fact, I often find myself using it as a mental crutch when trying to explain various characters and their motivations to people. And I’m not the only one. One of the popular internet memes became grabbing popular characters from TV shows, or movies and pasting their faces onto the D&D alignment grid like this one: 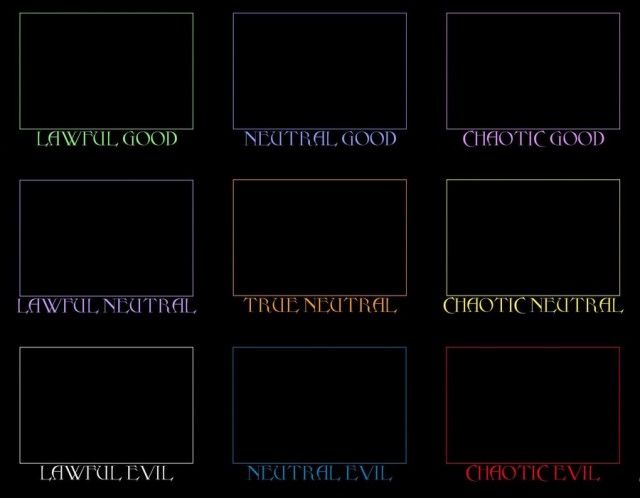 Sometimes this works fairly well. Most of the time however, everyone involved in the discussion will have their own version of the grid. Particular character can jump from the Lawful Evil to Chaotic Good spot and there will likely be a good argument supporting either placement. The alignment system is so vague that it completely falls apart when you try to apply it to sufficiently complex and nuanced characters.

Batman is a perfect example here, as he is infamous for neatly fitting into every single spot on the grid: 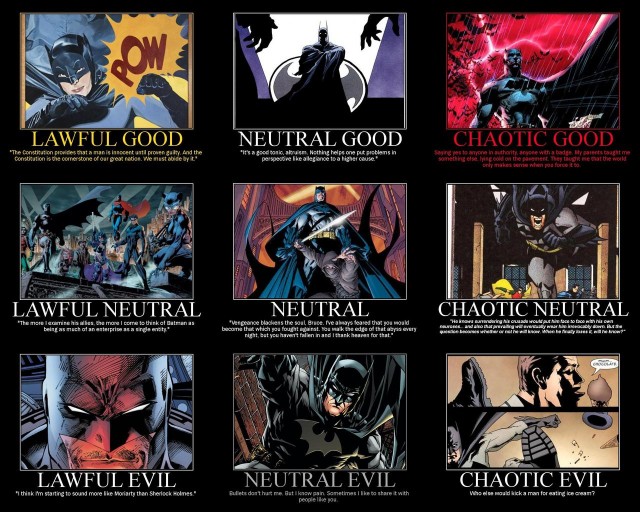 Batman has his own alignment named Batman.

Dexter, has a similar problem. I have seen him described as lawful evil (because he has a code of conduct), chaotic good (because he breaks the law, but for a good reason), true neutral (because he has no scruples about breaking the law, or his own code, but still manages to be a semi decent husband/father figure) and anything in between. Then again, I guess this is to be expected for a character who has five full length seasons under his belt. Same goes for Batman, who has been drawn and written for by countless people, had cartoons, movies and video games about him.

It is really hard to pinpoint such characters on the D&D alignment grid because their personality varies so much over time? Or is the grid too vague and simplistic to accommodate complex and nuanced characters that organically grew and changed over the years? Perhaps the vagueness is the strength of this system, because it allows us to have these wonderful arguments about alignment of fictional characters.

What do you think? What alignment is Batman? How about Dexter? Where would you place him on the grid? Can you think about any other fictional characters equally difficult to categorize?