China Miéville is probably best known for his imaginative fantasy work set in the same funky universe as the excellent Perdido Street Station. I really like what he is doing to re-invigorate the genre by pushing at it’s borders from the inside, but I’m most impressed with his work outside of it. For example I was absolutely blown away by the strange and subtly surreal detective story in City and the City. I was overjoyed to see him releasing a full blown SF novel – I was curious to see how his unique style and penchant for nonconformity and subtly oddball concepts will pan out in that sort of setting.

I am happy to report that Miéville and Science Fiction mix very, very well. Embassytown is positively excellent – well crafted, eloquent and deliciously strange. Granted, the author is not a techie like Charlie Stross or Vernor Vinge, so you can’t expect him to make insightful predictions on future of technology or the nature of technological progress. Miéville is interested in other things, namely aliens. 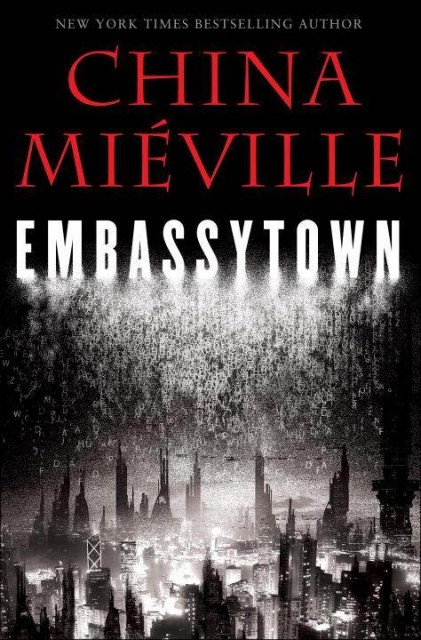 Here is my beef with aliens in SF literature: very few authors manage to pull them off well. They usually come in one of two garden varieties: human-like characters with weird names, or incomprehensible menaces beyond human understanding. The former group varies quite a bit with respect to shapes and sizes of its members, but they all have one thing in common. They think just like us, and can easily integrate into our society. They can empathize with us, understand our problems, and have remarkably similar cultures that include religions, political structures and etc..

This is one of the things that has always irked me about Vinge’s A Deepness in the Sky. His spider-like alien race was so remarkably human like, that it was hard for me to visualize them as spider-like creatures when reading the segments from their point of view. And yes, I know that he explains this as a translation bias but still – their society and culture was just so compatible with ours that it tested my suspension of disbelief sometimes.

The latter category usually features entities that are just beyond our comprehension and thus impossible to empathize or even communicate with. This makes them undeniably alien and strange, but because of their nature they usually can’t play a large part in the story. They can be some looming menace, approaching enemy or just a local presence that is treated by the characters like some force of nature.

Miéville’s aliens are positioned in between these two extremes. They are strange, they don’t think the way we do, but they are not incomprehensible. The entire novel revolves around communication barriers arising between humans, and a race of aliens for who are born into language. For them speech is an instinctive action, almost indistinguishable from thinking. They are unable to learn other language, and humans are only able to approximate theirs by breeding specially modified pairs of ambassadors who can imitate the alien sounds.

I don’t want to give too much away though, because the mystery of the alien language – how it works, how humans learned to speak it, and how the aliens incorporated the human visitors into their speech – is what makes this book so interesting. It is Miéville’s exploration of the relationship between language and consciousness.

The book starts kinda slow, with the author slowly unfolding mysteries of the small ambassadorial colony in them middle of an alien city. We learn about the daily life of the colonist, their interaction with the bizarre and mysterious hosts, their social and political structure through the eyes of a young citizen. About halfway through the novel the action picks up, when a voice of an unconventionally bred ambassador turns out to have very strange and unsettling effect on the aliens, completely changing the relationship between the natives and the colonists. There is intrigue, pressure builds up, and the whole thing ends in an action packed crescendo.

If you want to read a book with very well written, unique, strange and interesting aliens this is a novel for you. But it is not just a book about cool critters. Miéville’s prose is rich, eloquent and smart. His descriptions of the alien city, and the strange Embassy are vivid and picturesque. He really knows cities – how they work, how people live in them. Whether you are reading about New New Crobuzon, Beszel/Ul Quoma or Embassytown – Miéville delivers. He describes the fancy parts, the slums, the back alleys and the people who populate all these places. Cities are basically characters in his books – silent, motionless, passive, but not without a personality.

If I had to make a list of the most interesting, and most thought provoking books I have read this year, Embassytown would definitely be in the top ten. It has awesome aliens, interesting characters, a slowly unfolding mystery, and an action-packed finale. It is everything you could ask for in a good Science Fiction novel and more. I really hope Miéville will revisit the genre again, because I enjoyed this book much more than Perdido Street Station.


9 Responses to Embassytown by China Miéville