ScribTex – Learn LaTex in the Clouds

As you know, I am a big fan of LaTex. If you did not know that then you must be new here. Welcome to the blog! I have actually written a fairly large number of posts about this lovely markup language. If you never read any of my LaTex stuff, this should be a good starting point.

I always try to encourage people to try their hand at creating simple LaTex documents just to see how it works. Making your first few steps is actually quite easy. All you need is two or three lines of boilerplate code, and you are ready to go. There is a bit of a learning curve later on, but you will start seeing the benefits of your move right away. For example, if you are a student, expect to be complimented on how nice and neat your assignments look compared to the work your peers.

Alas, getting LaTex to work on Windows might be a bit daunting to the un-initiated. For example, the simplest installation method requires you to download a 1GB self-extracting package that includes everything and the kitchen sink. There are smaller packages, but they tend to be more labor intensive. So just to try LaTex you need to invest a lot of time upfront – you need to download a big file, wait for it to install, familiarize yourself with a new IDE, etc… It is not something most people will do on an impulse. You almost have to set aside about an hour of two for setup before you even write a single line of code.

Are you one of these people who was a bit curious about LaTex after reading my posts about it, but never bothered to install and configure it on your windows machine? Well, I have good news for you – now you can jump right into it, without any setup or preparation. How?

ScribTex is essentially a Google Docs for LaTex. Well, not exactly but I think this is the best way to describe it. The service lets you create new Tex documents directly in your browser or upload existing files and then compiles them for you on the server side. You push a single button and you get a PDF file that you can download and store locally. 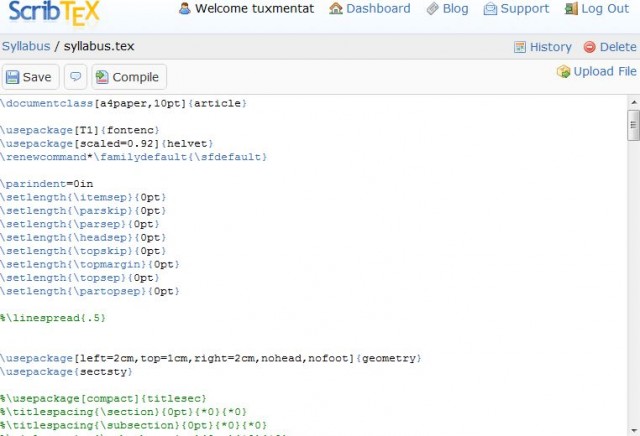 The approach is minimalistic – you don’t get any frilly buttons or code-assist tools. Most IDE’s (like TeXnicCenter or TexMaker) will actually give you a much richer interface but in ScribTex all you get is a plain text box, with code highlighting, and two buttons labeled Save and Compile. That’s about it. But I actually don’t mind that. It is plain, simple and it works. More importantly, it makes it a better learning tool.

When you are just starting with a new language you don’t necessarily want the IDE to do all the work for you. It is usually a good idea to do things the hard way first – look up how to do things, use trial and error, explore and etc. Later on the little buttons may be helpful shortcuts, but initially it may be tempting to use them as a crutch. ScribTex removes this temptation.

It gives you something else though. Like most cloud services, ScribTex keeps track of your document’s history and lets you revert to previous versions at will: 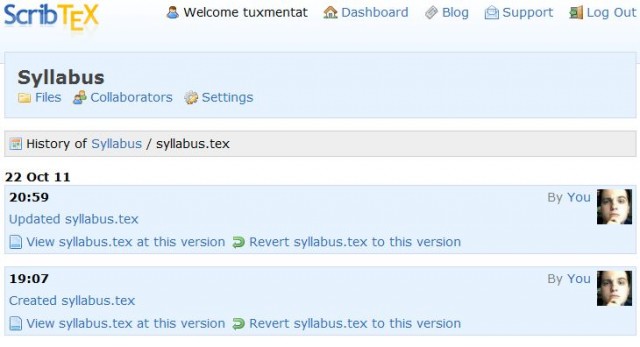 The History Page in ScribTex

You know what this is, right? It is poor man’s version control and you get it for free. I mentioned this in my Anti-Word Processor rant – most people don’t actually use any version control. Even when using a LaTex specific IDE you will not get this sort of feature unless you set it up yourself (for example by using DropBox). With ScribTex, you get it for free. This illustrates that the creators have their priorities in order: frills and UI gadgets are nowhere to be found, but robust versioning is built into the core of the service. I like this.

Another feature you won’t find on your desktop is the collaborative editing which seems analogous to similar feature in Google Docs. I haven’t really had a chance to test it so I can’t tell you how well it works, but I know that it is there. Combined with the version tracking, it seems to provide a very decent platform for document sharing and colab-editing.

When you hit the compile button, a preview page will open in a new browser tab:

I’m not sure what setup do they have for this service, but ScribTex actually compiles documents faster than my computer. And by my computer, I mean the beefy gaming machine, with a fast dual core CPU and ridiculous amount of memory. The compilation takes mere seconds – about as much time as it takes you to load any other page in their service, which is quite impressive.

If your file has errors or warnings they will show up in the log tab on the same screen: 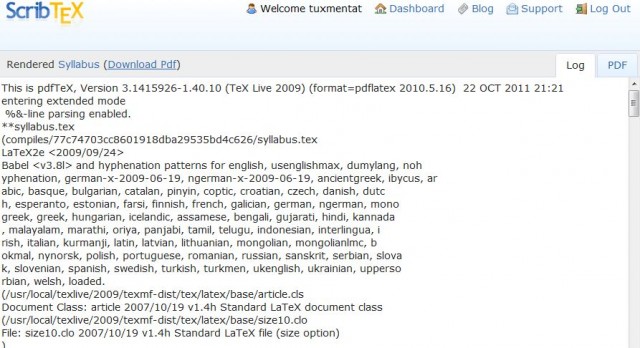 The quality of the output is decent. The syllabus I used in the screenshots usually compiles to a two page PDF document on my desktop. With ScribTex it got stretched a bit onto the third page. I’m not exactly sure why this happened. I looked through my log and all the packages were found and activated properly, and there were no warnings or weird messages. Perhaps the font scaling is not as granular as in the desktop version?

I guess my point is that the output is not 100% perfect. In certain circumstances your document may be a bit off and not exactly the same as when you compile it with LaTex proper. But whatever failed, failed gracefully. The document wasn’t broken, it wasn’t unreadable and it wasn’t ugly. I guess the slight discrepancies (which only become apparent when you compare two documents side by side) are a fair price to pay for the convenience of compiling your Tex code in the cloud.

ScribTex is a three tier service structure. The basic plan gives you 3 projects, limited number of collaborators per project and up to 50MB of storage space. I do realize that the storage capacity looks like the size of your hotmail inbox in the 90’s (times ten) but it is actually quite reasonable. Roughly 90% of the data you will be storing on their server is going to be plain text, and maybe a few jpeg images for charts. Most documents you will produce probably won’t break 1MB barrier (compare that to Word – an empty .doc file takes up around 300KB of space for some strange reason). So I’d say the storage is fair. It would be much nicer if they started you with 1GB and went from there, but I guess they realize no one would ever upgrade then. Filling up 1GB with pure LaTex data is actually quite difficult.

Here is their price structure:

The paid plans look a bit pricey to me. While I would like more disk space, $5.99 per month seems a bit too much. I just don’t see myself using this service enough to warrant that kind of expense. But your millage might vary. I almost wish they offered cheep incremental upgrades – like buy additional 50MB of space and an extra collaborator for $1/mo or something like that. A free plan user running low on space would surely be tempted by such an offering much more than by the $5.99 plan.

Best part of the service is probably their free sandbox environment in which you can start experimenting with LaTex without the need to signing up. You can mess around with the sample documents on that page, change them, upload your own files and see how they compile. Your changes won’t be preserved, but it is great for learning and experimenting.

If you ever had an itch to work through some of the examples in my Let’s Learn LaTex series, this is a tool for you. Simply go to the sandbox, hit the “New File” button and start messing around.

All in all, it is a very nifty service. I highly recommend it as a learning tool. I have used it in the last few weeks to quickly tweak documents from computers that did not have any LaTex software. Like a boss. The output is a bit off, the pricing is a bit steep – those two areas could use some improvement. Other than that, I like it.

Oh, and of course it is a cloud application, meaning you don’t actually know who will be reading your documents. Don’t put anything confidential there, and always have a local copy in case a sudden bankrupcy (of the cloud company, not you) or some random ban for obscure terms of service violation. But I guess that goes without saying.

This entry was posted in programming and tagged latex, review. Bookmark the permalink.


4 Responses to ScribTex – Learn LaTex in the Clouds