The Technology of Rainbow’s End is Here

In 2006 Vernor Vinge wrote Rainbow’s End – a novel in which he depicted a near future world where wearable computing and HUD contact lenses have replaced traditional computers. He wrote about a world in which augmented reality delivered directly into your eyeballs was an important information layer used in daily life. In 2007 Charles Stross wrote a novel set in a similar reality. His Halting State dialed the technology angle a bit, placing the action nearer to our current times. Stross’ characters used glasses to deliver augmented reality experience in the form of HUD overlays, gaming feeds and etc..

I have found both of these books extremely fascinating. Not just because they are really solid works of science fiction, but because I think both Stross and Vinge have a really good grasp at where our technology is heading. We live in the midst of a mobile revolution. Smart phones and ultra thin tablets are slowly pushing out traditional computing devices out of consumer space. The demand for ultra-portable, high fidelity computing gadgets is skyrocketing. Augmented reality is slowly making leaps and strides, limited not by software, or hardware but by the form factor of our current mobile devices. There is simply no way to deliver a persistent AR experience through the lens and screen of a smart phone.

So it is easy to imagine that these trends will culminate in popularization of virtual displays built into eye-wear – similar to the gadgets described by Stross and Vinge. It is almost inevitable, and unless we will invent something better in the next few years (like direct cortical interfaces) HUD eye-wear is bound to become a big thing soon. To wit, when I teach my class I like to show my students this slide: 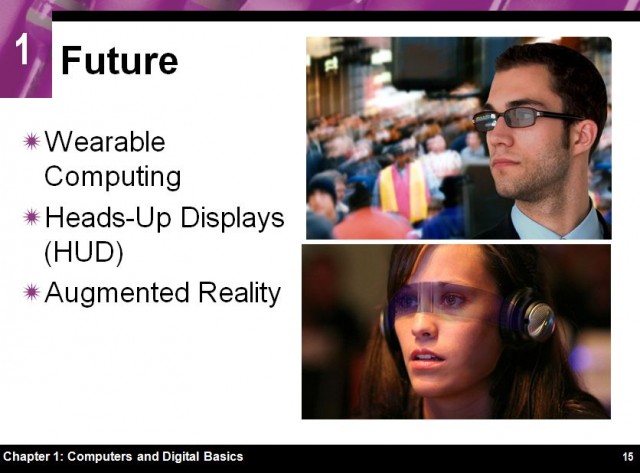 One of my powerpoint slides

Granted, I always make sure the students understand that this is merely one of the many possible variants of the future. But, it is a damn likely one, considering we already have very complex augmented reality applications running on our phones.

I always thought that we will have to go through a Halting State stage, messing around with AR Glasses (a technology we already have) before we get to Rainbow’s End stage with contact lens displays. It appears that I was wrong. Or rather that both Stross and Vinge were right in a way.

“Over the past months, we have demonstrated contact lens-enabled eyewear for mobile devices, including smartphones, portable game devices and media players that deliver panoramic, high-resolution experiences for entertainment and planned augmented reality applications,” Willey said.

The new system consists of advanced contact lenses working in conjunction with lightweight eyewear. Normally, the human eye is limited in its ability to focus on objects placed very near it. The contact lenses contain optics that focus images displayed on the eyewear onto the light-sensing retina in the back of the eye, allowing the wearer to see them properly.

Granted it’s not full Rainbow’s End tech as the lenses are said to still require some light eye-wear to accompany them, but it is an extremely promising start.

Despite my near constant computer use my eyesight has been pretty good so far. As a result I never actually used contact lenses, and the mere thought of sticking foreign objects into my eyes is giving me the shudders. But if I could get lenses that would interface with my phone and give me a real life HUD overlay I would immediately force myself to overcome this limitation. In fact, I might start training by sticking fingers into my eyes right now, so that I’m ready when these things hit the market.


2 Responses to The Technology of Rainbow’s End is Here