Back in July I have reviewed an excellent Polish SF novel titled “Perfect Imperfection”, which by the way may be getting an English language release soon. Over the holidays I acquired two new books by the same author thanks to my Polish connections (thanks mom!).

One of these books is Black Oceans (aka Czarne Oceany) – a novel of about the same volume as Perfect Imperfection, and about the same quotient of ideas per page, but with a much less likable protagonist. In Perfect Imperfection, we explored the future through the eyes of a 20th century everyman… Or rather a virtual construct that was made to believe he was a 20th century man – but you don’t find that out until the book is almost over, so whatever. In Black Oceans our leading man is a goddamn career politician. 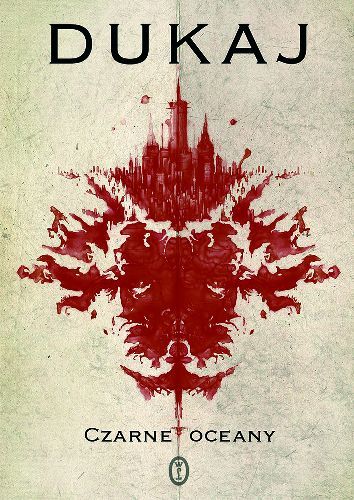 It’s not that I have anything against politicians, other than despising them as a rule of thumb. Granted, there are exceptions of course. People working on the lower rungs, staffing governmental offices are often good, patriotic citizens who really want to make a change. Most of the big boys however are there for one reason, and one reason only – power. When I see a politician, I see a well adjusted sociopath. To play the game of democratic front running you almost have to be one – you say what your barely literate constituents want to hear with a smile, you do what your wealthy campaign contributors demand of you – which is usually to shaft your constituents hard, and you climb to the top by stepping all over your peers, and disgracing them in a public forum. It’s a life style that personally disgusts me. But as long as you have checks and balances in place, and as long as you can use the whip of free press and public opinion to keep the power hungry sociopaths in line, the system works – at least for the most part.

We could argue this point back and forward, but the fact is that the protagonist of the book fits the bill. Nicholas Hunt is a career politician who has never encountered political intrigue, plot or political swindle he did not try to profit from. Until at some point he got burned, and banished from Washington. He did not get kicked out though. His political opponents cooked up a fate worse than a public disgrace for him: a cozy position as the head of a bureau overseeing cutting edge top secret research and development projects for the government. The pay is good enough to maintain his lofty lifestyle but at the same time he is away from the Washington salons. His work is by definition, low profile – none of his achievements will ever be publicly acknowledged, no one save for a small group of officials with security clearances will ever hear of his work. He is a political non-person. And to make matters worse, there is a carrot at the end of the stick – there is a chance that if he performs well enough, and suffers his punishment with dignity his supervisors will one day promote him away from the top secret bullshit, and let him back into their midst once again.

What is Hunt’s research group working on? Bunch of things. When he started, the main focus was to build a searchable database of DNA samples of citizens, residents and visitors to the US. Why? Well, to better aid the needs of the military industrial complex of course. In the “10 minutes into the future America with a dystopian bent” where the action takes place, NSA is already tapping and data mining all domestic communications. All public places and most private apartments are blanketed with video surveillance networks. They are not there for the government of course – they are a shared resource used by insurance corporations which use the footage as evidence in civil lawsuits. It sounds Orwellian, but the citizens quite like it, because the insurance networks almost eliminated things like racial discrimination, sexual harassment or even plain rudeness. Everyone is always nice and polite, least they want to get sued. NSA of course has a back door into the surveillance networks, but they don’t brag about it, and most of the time they use subpoenas to obtain footage they already saw so people don’t care.

So in this world of nearly complete invigilation, having a DNA database of citizens makes logical sense. The task is made easier seeing how for several generations now, most of the US citizens living above the poverty levels have been enjoying the benefits of affordable, safe and widely available genetic engineering. You visit a clinic, you select traits you want your baby to have, and you come home with a self contained, self powered incubator box where you child will gestate for the next nine months. You don’t even have to donate eggs or sperm. Naturally you could but designing a baby based on the DNA of the parents is expensive, error prone, and does not guarantee you will get the traits you paid for. So most clinics design babies from scratch, using pre-made DNA templates. The beautiful thing about this system is that the genetic diversity in population becomes a non-issue. Even if an entire generation picks the same two or three templates, it won’t have any adverse effect as long as they also engineer their children. The human evolution has been forked in two different threads. One is governed by natural genetic drift, while the other one is a non-incremental process of discrete trait selection based on constantly changing fashions, fads and popular body types. The two evolve independently in different directions, but the interesting things are happening when the two systems intersect.

The class between the naturally evolved genomes, and engineered ones often produce strange results. Often the artificially selected traits drag junk DNA into the engineered genome. This junk does not matter, unless it’s bearer decides to reproduce naturally. At that point, the junk may be passed along to the offspring and activated. Unfavorable traits that were long lost due to natural selection are coming back. New traits are becoming more common. One such trait is telepathy.

Hunt’s team has identified and isolated a genome sequence that can produce an individual with telepathic abilities. This sequence never occurs naturally, and would never be included in standard templates – but it started popping up when the two populations cross-breed. And so he finds himself at he helm of an X-Files like organization which tracks, captures and experiments on telepaths in the wild. The aim? To help US win the economic wars.

In Dukaj’s universe conventional war is too expensive, and too costly in terms of PR. Most first world nations re-geared themselves to conduct economical warfare instead. They do it through industrial espionage, tactical investments poised to destabilize foreign corporations, exporting unfavorable legal regimes to other countries and etc. The core of this warfare is done via automated expert systems that game the stock markets. Human brokers are essentially obsolete, because they can’t possibly keep up with the machines. All nations and all major corporations have their own systems that play this game and feeding off each other. These systems no longer make decisions based on actual market situation, but factor in the behavioral patters of other expert systems. It is a high level meta game, where you often make disastrously bad decisions, only because they will cause a cavalcade of reactions of other systems, that may help you achieve your goal.

How do you use telepathy to wind such a war? Well, it is complex. Hunt’s team discovers that thoughts behave like waves – they propagate faster than light away from the thinker, and lose intensity as a function of the distance, but never truly dissipate. Furthermore, residual thought has the ability to clump together and self organize without the aid of a biological “thinker”. These organized clumps of thought are dubbed “monads” and used to explain phenomenons such as Déjà vu (you just walked into a standing residual monad) or existence of so-called hunted houses (traumatic experiences created a monad). The difference between a telepath and an average person is that the later has a built-in resistance that shields their mind from foreign thoughts and modads. The shielding is not perfect, and a persistent monad may still affect your mood, or even implant foreign thoughts. Conversely a telepath, with no such shielding can be trained to produce or re-program monads so that they can be deployed as memetic weapons. You can figure out a way to produce reliable monads that would influence people to buy Coca Cola or sell certain stock you could easily be the biggest economical superpower in the world.

The problem is that US is not the only nation that made the discovery. In fact, US is actually lagging behind with their research. Because of bureaucracy, and a bit of intentional sabotage Hunt’s team has been lead astray and spinning in circles searching for highly-organized, intelligent monads while other powers were honing them for weaponized use. Essentially, they have been wasting time searching for god. Then shit hits the fan and monadic wars kick off with a bank. Hunt gets blamed, and has to go into hiding while New York City erupts into chaos, and civilization crumbles down.

Instead of summarizing the plot, let me just list some of the interesting ideas explored by Dukaj:

The book is dense with crazy ideas, incredible set pieces and a lot of socio-political and scientific musings. Dukaj picks up on all kinds of worrying trends in American politics and exagerates them to create a scary dystopia that could possibly come to be one day. The first chapters are firmly ground in reality, and exploring the high culture of this near-future world, but the crazy ideas quickly pile up in a competitive arms race for economical domination. Hunt starts as a baseline carer politician, later installs a neural interface, gets it compromised, ends up bickering with a near-sentient virtual “adviser” who takes the form of a devil, and eventually ends up becoming a distributed intelligence simultaneously existing in dozens of forcefully taken over bodies. It is a crazy, but awesome ride and the speed at which Dukaj jumps from one idea to another can easily give you a mental whiplash.

It’s not as good, or as ambitious as Perfect Imperfection but I still enjoyed it quite a bit. If you can read Polish, I highly recommend it.