Halting State is definitely one of Charlie Stross’ low end books. It is nowhere near as impressive and intellectually stimulating as Accelerando or Glasshouse. I’d probably put it in the same category as Singularity Sky. Still, it is quite interesting and in a way prophetic like much of his work.

The book is one of these near-future SF novels. It’s year 2012, mobile technology almost completely replaced personal computers in regular day-to-day life. EU, China and India are the established superpowers while US lost it’s technological edge, and is struggling with economical depression and infrastructure collapse. Now, I know this does not sound like science fiction, but you have to keep in mind that the book was written four years ago. That’s like a decade and a half in Internet years. To wit, while Stross describes the “futuristic” mobile technology in great detail, he fails to mention the iPhone or the Android platforms. Why? Because they did not exist when he was writing his book. In halting state the leading platforms are WinCE with .NET, Symbian and RIM.

Symbian? When I read that I actually flipped back to check the publishing date. I was like “wow, is this book from like the 80’s or something?” Then I remembered than in the 80’s cell phones were the size of bricks and gave instant cancer to everyone within 20 feet. It puts things in perspective, doesn’t it? The mobile revolution has happened within the last four years, but it feels like we had this rich smart-phone environment for decades now. Gotta love the exponential nature of human progress… 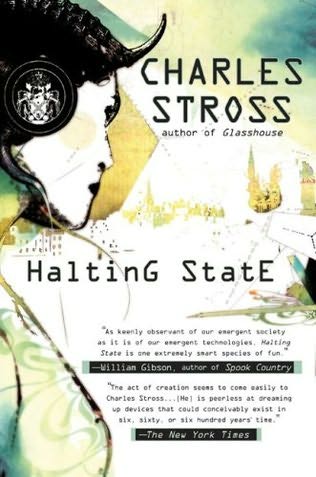 Charlie did get a few details a bit wrong though. Apparently by 2012 all major MMO makers ditch the PC, and go mobile. Apparently two or three open, cross-platform frameworks have emerged that allow you to run pretty much the same code on a myriad of smartphone models, regardless of hardware and OS they are running. Granted, that’s what should have happened – having the mobile world divided between a closed monoculture OS/hardware combo and a cross-platform OS made by a frightening, yet lovable infovore is probably less healthy than a flowering of platforms bound together by common frameworks and protocols.

Oh, and in 2012 everyone has Bluetooth specs which can be used as a semi-transparent overlay or go completely opaque if you want to do work, or play a game. I don’t know about you, but I can’t fucking wait. Are HUD glasses really that difficult to make? They would make life so much easier. Right now I actually have to hold my phone in my hand when I’m lost and I’m following Google Maps directions. And when I use Yelp’s Monocle HUD like feature to find restaurants, or use Google Googles to find more information about something I end up looking like a tool or a pervert snapping pictures of random people on the street.

EU cops have more than that – they walk around studded with twenty odd concealed evidence cameras that record everything they see and upload it to central databases in real time. I’m suspecting this was supposed to be a bit spooky and Orwellian, but on the other hand this would be a great way to combat corruption and police brutality.

Honestly, reading Halting State is almost like watching an episode of Sliders – the setting is eerily familiar, but wrong in very subtle and sometimes disturbing ways. Back in 2007 it would probably have blown my mind, but these days it mostly made me shake my head and go “Charlie, Charlie, Charlie – if you only knew…”

For example, if you only knew that the MMO market is going to become stagnant and reject any and all innovation. Stross is describing immersive MMORPG’s using procedurally generated content in pretty much the same way we talked about last week. Unfortunately, we don’t have anything like that yet because most companies out there are dead-set on making The New World of Warcraft™. And by that they of course mean making the exact, carbon copy of WoW with a single unique distinguishing feature and better graphics. No, seriously – since 2004 I have been waiting to see a single successful game to make a dent in the market without actually aping WoW. So far I have only seen one: Eve Online. Unfortunately Eve is one of these games that are awesome to read about, but not as much fun to play.

To say the least, this parallel dimension quality of Halting State makes it fairly amusing to read. It does however have one really cool idea, which I can’t reveal without spoiling some of the plot. So if you don’t want to be spoiled, please avert your eyes, and skip the next few paragraphs.

Stross has this brilliant idea of intelligence agencies using ARG’s to train and recruit unknowing operatives. Just think about this – how many collective man-hours have been spent by online communities on stuff like Portal 2 ARG, or LOST Experience? We are talking about thousands of skilled, intelligent and educated people spending a lot of their own free time and effort to unlock stuff that was nothing more than a glorified “Remember to drink your Ovaltene”.

Or how about the internet detectives who can pull anyones dox out of their ass, if there are LULZ to be had. What if you could harness this power to your own end. What if you could semi-reliably control the unwashed masses of the internet. Every intelligence agency needs low wage grunts, and useful idiots. People to do the dirty, menial and potentially incriminating work.

For example, say you need to put a tail on some low priority target. You could send a highly trained spy team to do the job and incur high operational costs. Or you could send 6 independent teams of 2-3 idiots with cell phone cameras for free. They are not as reliable, but you pay nothing, and you get plenty of redundancy to make up for the quality.

In Halting State, there is an ARG called SPOOKS. You sign up, and you essentially play a spy. Every once in a while, someone will call you identifying himself with an agreed upon code-phrase and give you a mission. Pick up a package, and deliver it to this address. Take pictures of this building. An operative from the opposing team just entered the restaurant where you are currently eating lunch – report on his every move, and tail him if possible. That kind of stuff. New players get make-believe assignments at first, but once they prove they are reliable they might be assigned real spy stuff. Of course they are never told that. They think it is all a game – but unknowingly they are gathering real intelligence for whichever agency is running the ARG.

This is such a clever idea, I’m almost certain we will never see it happen in real life.

Before I wrap this up, I must mention one more thing. Halting State uses second-person narrative style. “You woke up at 7am, went downstairs and ate cereal” – that sort of thing. It is quite unusual, and takes some getting used to. Especially since the story is told from the point of view of three different characters. Thankfully Stross labels each chapter with the name of the appropriate character, but it is still quite weird. I can’t remember the last book I read that used this narration style. It’s not bad – it’s just different.

If you can deal with the odd narration though, it might be worth picking up. It’s not great, but a decent read with one cool idea I outlined above, and plenty of unintentional anachronisms, and almost-on-target-but-not-quite predictions. That, and Stross injects his novel with a decent amount of geeky humor making it a light an enjoyable read.


One Response to Halting State by Charles Stross