Here is a very poignant question: what happens when you digitize a human mind and then bootstrap it and run it as a self aware software entity? How that virtual person relate to the original physical person from which it was created? Do we count it as a parallel fork? An autonomous person in its own right? What happens when someone makes a bit-wise copy of the virtual entity? Is it still the same person? How do identity, autonomy, property and interpersonal relationships work in a world where these things are possible?

A lot of SF writers hand wave these issues away. Characters jump from physical to virtual realms, run parallel copies and merge their forks without as much as giving these issues a second thought. Tony Ballantyne’s novel Capacity revolves around the core belief that every self-aware instance is a person unto its own. So if you make a copy of yourself, you have no authority or leverage over it. It is it’s own person. It becomes a citizen with the rights and protections that physical humans enjoy. 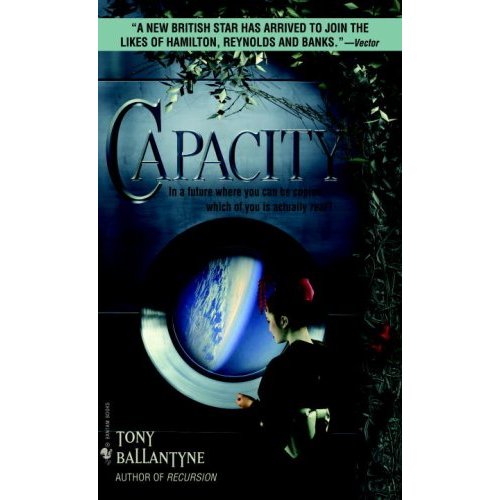 We have touched upon this sort of issue years ago in the Consciousness Interruption thread. From time to time I like to revisit these rather poignant questions and shine some new light at them. For example, reading Anathem by Stephenson and Hollow Man by Simmons made me start to wonder whether or not digitization of human consciousness would be even possible on traditional hardware, considering the quantum properties of our minds. I was hoping that Ballantyne would add his two cents to this ongoing discussion but, alas he did not.

His main focus is the dilemma of involuntarily copied individuals: people who have existed in physical world and then had a copy of their consciousness made for whatever reason. That reason usually tends to be rape, torture or other abuse, but I’ll touch upon that later. The point is that Ballentyne introduces characters who used to live in physical world, and now have to adjust to being digital constructs in a processing space. As you could imagine it is a rather traumatic experience… Though the author really has a hard time writing broken, traumatized people.

In his universe, touring-grade artificial minds co-exist with digitized humans, so I was expecting him to explore the boundaries between these two groups. It would stand to reason that there would be some gray area between them – that there would exist augmented humans tat have removed themselves so far from the human condition they no longer can relate to baselines, and AI’s who either pretend to or believe themselves to be digital copies of former homo sapiens. But this is not the case. In the Universe of Capacity there is an all powerful, all knowing Social Service bureaucracy which ensures the humans do not evolve any further away from their baseline condition. They even go as far as artificially enforcing a human like life-spans to a digital copies. So instead of being immortal, the virtual people age and die just like the physical people do.

If you happen not to like it, then tough shit. If you exist in physical world, then nice counselor will visit you at your house and have a long talk with you explaining how your feelings are invalid, and tell you want feelings you should be embracing and give you appropriate prescription drugs to help you out with that. If you happen to be a digital construct, then they will just tweak your software a bit to make you feel better about the world. You know, for your own good. Funny part is that these are the good guys and Ballantyne actually defends this screwed up organization for the most part.

Or rather, the protagonists kinda do buy into that crap most of the time. There is some harsh criticism of this system in the book, but it comes from the villains who are somewhat… One dimensional. You see, they are all rapists. Some writers choose ambiguous dark character, or lovable scoundrels to e their antagonists. Ballentyne makes sure that every potential antagonist has at least one “kick the dog” moment which involves rape, torture or preferably both. Just so you can be absolutely sure they are bad, despicable people – especially when juxtaposed against the protagonist who is apparently a virgin. She is chaste by choice for reasons that are not full explained, and not readily apparent from the dialogue.

Sexuality in this novel is just… Weird. Nearly all characters have some weird sex related hangups or deviations: they are either rapists, stalkers, voyeurs, abused victims, submissive masochists, self-avowed virgins or asexual robots. And they all obsess about it constantly. Even the robots choose to wear engendered, sexualized bodies with suggestively placed panels and buttons that create illusion of sexual organs. Everyone is attractive, everyone ogles everyone else and everyone feels guilty about it. And the only sex people seem to be having is of a non-consensual kind. I honestly didn’t know what to make of it – between the slut shaming, the rape fantasies, the recurring, and always awkward “seduction of the virgin” motif it all felt just a tad disturbing. Not sleazy or low brow mind you – just kinda worrying.

Perhaps this weird, off-color shame and rape fixation is so jarring because the character themselves simply are not layered enough. There is just not much to them beyond their weird hangups. They just don’t act like regular people. They have these long conversations which are emotionally dead and sterile. You know there supposed to be emotions in there, but only because Ballentyne tells you about them, stubbornly breaking the good old “show, not tell” rule on just about every page. This is not a direct quote but a lot of the book reads a bit like this:

Helen was very angry. “I am very angry!” she said with anger. The others could see she was visibly agitated and very angry.

I’m exaggerating of course – it is not nearly as bad, but while reading the book I was almost tempted to start tabulating the instances when Balentyne just names emotions without ever making you feel like they matter. There wasn’t a single instance when I was actually engaged enough to care. And that’s ladies and gentlemen is a storytelling failure.

Maybe if these characters were not so off-beat and emotionally broken by design, this story could have worked. But nearly all of them are supposed to be these traumatized emotional wrecks. The problem is that you not only don’t feel it, but you cannot relate to them. They are just weird and unlikeable and that’s a huge problem.

Which is not to say that protagonists always need to be nice, likeable characters. Robert Gu from Rainbow’s End for example is a massive jerk from page one, but Vinge can get you, the reader into this guys head and show you what makes him tick. Yes, he is a self-centered asshole most of the time but he is very much human, and not that difficult to identify with. Judy is pretty much a comic-book character, with her weird get-up and her unshakable belief in social care, and her weird virginity thing. Justinian’s actions make no sense – mostly because he is being strung along and manipulated by the AI’s that sent him on his mission. It would have worked if Ballentyne did not insist on doing play-by-play on how the attending robot uses reverse psychology to get the stupid human do reckless and suicidal things all the time. Helen, who is supposed to be the fish out of water, reader surrogate is just boring.

To make matters worse there is no conversation in the book without an obligatory “as you know…” exposition dump. And you know exactly when the author is foreshadowing because he will repeat himself three or four times throughout the next few chapters just to make sure you are thoroughly preferred. Foe example, I believe he brought up the two slit experiment not once, not twice but three times. And it was briefly explained each time, in case you missed it.

Pacing is also terrible. The book drags mercilessly, despite the fact that not much happens at all. The action constantly stops so that people can have terribly written and dreadfully boring conversation. The novel has three (almost four) parallel threads, only one of which is even remotely interesting because it contains an element of the mystery. The other two just seem like padding. The story of Justinian and his visit on the remote Gateway world where all AI’s commit suicides (but people can thrive) could have been a somewhat interesting short story. Everything else was simply uninteresting padding.

If I didn’t know any better I would have guessed that this was a literary debut of a rookie new writer, but Ballentyne has been publishing short stories and novels since the late 90’s. This is not his first novel. In fact, it is not even the first novel set in this particular universe. But you wouldn’t know it. So much time is spent explaining how the setting works I was initially convinced it was a stand-alone work, rather than second book in a loosely connected series taking place in the same universe.

There are a few interesting ideas in the novel. The sinister threat at the edge of the galaxy would have been rather intriguing if Balentyne didn’t explain int into the ground from multiple angles. A good writer introduces a mysterious menace, vaguely describes the way it works, usually by having it scare the shit out of the protagonist. Then he lets the reader’s imagination run wild thinking up all the ways it could fuck shit up if it ever got out into the world. Ballentyne has the protagonist have a chat with a really smart AI which tells him exactly why the thing is dangerous, how it works and why he should be afraid of it. And then the protagonist fears it, very, very much. Or so you are told at least.

Capacity is a prime example how a few worthwhile ideas could be absolutely ruined by a dreadfully bad execution. It has shallow, unlikeable characters, dragging exposition dumps, stupidly obvious foreshadowing, science for dummies explanations of obvious things and terrible pacing. I recommend staying far, far away from this title.