If you have followed this blog for any amount of time, you know that I am a big believer in wearable technology. I’m actually kinda bummed out that I mostly missed the boat on Google Glass beta program by not being an Android developer and all. Can’t wait till smart glasses become available to the general public and augmented reality becomes something the mainstream can take for granted. But we still have a few hoops we have to jump through before that happens.

Aside of smart glasses, which are still very experimental technology, the other wearable area that is getting a lot of attention lately is your wrist. Smart watches are a big gamble, but one that at least has a potential to pay off. Google is aiming high with their Glass project, and quite a few fashion conscious individuals will have to grow into the idea of wearing a computing device on their head. Watches are an easier sell. People used to wear watches all the time before smart phones eliminated the need for wrist-bound time measuring device. Nowadays they are mostly worn as fashion statements (or “bling” if you will) but bringing back utility watches should not be extremely difficult. Especially since the precedent of wearing watches that do more than keep time has already been set by all kinds of stop-watch and calculator-watch devices in the past. I believe it is easier to get someone jumping on the smart-watch bandwagon than on the G-Glass train.

That said, I am already sold. I was waiting for wearable tech to start popping up on the market since Rainbow’s End. And it’s finally here. I am now a proud owner of a Pebble Smart Watch: 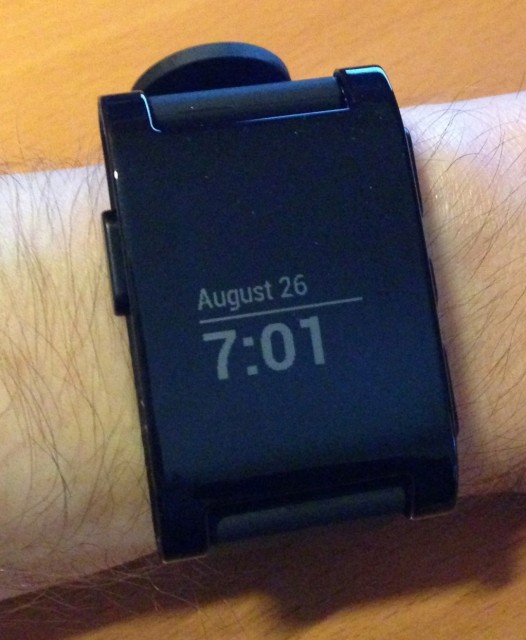 So how is Pebble? It’s great, but it is not necessarily smart enough to warrant the “smart watch” tag. Without a smart phone to bind with, it is just a neat electronic watch with adjustable faces. Which in itself is really cool. Pebble comes with several nicely designed faces, and you can download many more from the interwebs or even create your own. That in itself is almost worth the price of the device itself. But other than that, the watch does very little else on its own.

By design the Pebble is a wrist mounted extension of your smart phone. Much like a Bluetooth headset which is supposed to give you hands-free auditory access to the device, the watch gives you almost “hands-free” access to visual cues generated by your phone: things like notifications, reminders and messages. This is the problem Pebble aims to solve:

Let’s say you are at a party or enjoying a meal with someone special and your phone suddenly blings, buzzes or makes some other unexpected noise that you think may indicate an important text message just came in. Without a Pebble on your wrist you may be tempted to immediately dive into your pocket to retrieve the phone, or start shuffling through the stuff in your purse to find it. Pebble allows you to just discretely glance at your wrist to see the message. While this may not be incredibly impressive, it is very convenient. The watch vibrates whenever it gets triggered so you will never miss that important communication even your phone is safely tucked away an out of your reach. 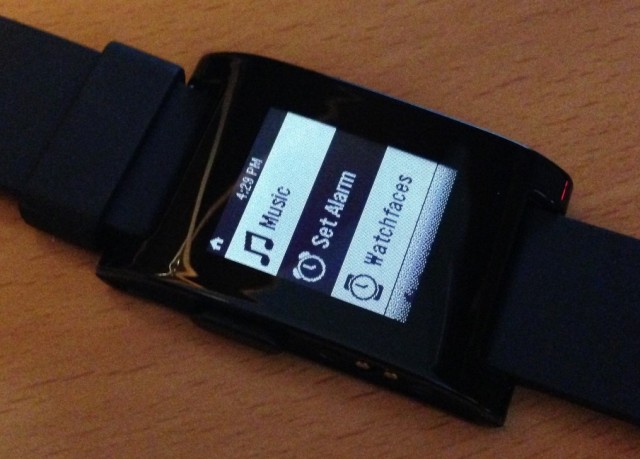 That’s about the extent of functionality you get out of the box: custom watch faces, and phone notifications pushed to your wrist. Oh, and you can control the music player app with it. Pebble does have an API that allows developers to create apps that work with the device, but for now there are very few of them out there. Android users are actually much better off in this department since there are quite a few apps in the Google Play store. The iOS users do have access to some neat apps like Smartwatch+ but pretty much anything that isn’t advertised on the main Pebble website requires a jailbreak to work.

But I guess this is one of the downsides of owning an Apple phone: shit is locked down tight unless you are one of “special friends” with privileged backdoor access via unpublished API’s. For the time being stock iOS users have to set their expectations low when it comes to utility apps for Pebble which is rather unfortunate. I hear that iOS 7 is a little bit better about supporting complex third party Bluetooth devices but I’m not holding my breath.

Still, for the amount of utility it provides I’d say it is worth it. The e-ink display is great, the wrist-flick activated back light works amazing and the battery life is pretty decent. The Pebble website claims you can go about 7 days without charging, but it seems that number is closer to around 4-5 in real life settings. Still, this is rather impressive considering the fact it has an always-on Bluetooth transmitter in there. Anyone who used to strap an iPod mini to their wrist will probably be very happy with the device. While it doesn’t have the vibrant color display, you won’t have to charge it every night and it never goes to deep sleep mode when idle.

Would I recommend it? Yes, it is neat. I actually like having a time telling device on my wrist that also gets emails and text messages. Will it change your life? No, not really. Pebble is nowhere near revolutionary, but it is a small step towards true wearable technology. Consider it a training bra for the mainstream audience that aims to make them comfortable with the idea of strapping actual computer to their wrist one day. And as such it does a really great job.