Rapture of the Nerds by Charles Stross and Cory Doctorow

Charless Stross is currently one of my favorite SF authors, but his output can sometimes be uneven. He typically averages between stuff that’s absolutely bloody brilliant (Accelerando, Glass House) to high end pulp (like Singularity Sky). Even his low-end, underwhelming stuff is still high quality science fiction. When he does manage to hit a ball out of the park, it is great.

Recently, Stross collaborated with another author I like: Cory Doctorow, and published a jointly written novel titled Rapture of the Nerds. I read it weeks ago, and have been mulling over a review ever since then. It’s probably one of the hardest reviews I have ever written, because no matter how much I try I can’t seem to stretch “meh…” into a thousand word essay. 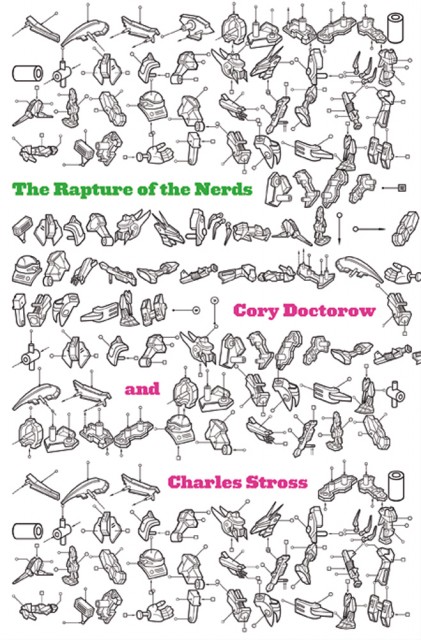 Rapture of the Nerds Cover

It’s not that the book is bad. It is perfectly decent novel. In fact, if you read the synopsis it is the kind of book I like: near future, post singularity novel about baseline human interactions with “weakly god-like” entities living in the Marioshka cloud built around the sun. I honestly don’t know how it is even possible to mess something like that up. And yet here we are.

Never mind, scratch that last thought. To be fair the authors did not mess anything up. They did not drop the ball at any point. I guess I’m just kinda disappointed they did not deliver a fancy slam dunk but instead went for a classy but less impressive 3 point shot. Are these basketball metaphors doing anything for you? Because I have no idea what I’m actually talking about. Those are basketball terms, right? Or is slam dunk a hockey thing? I’d google it but that would actually require me giving a fuck about sports, but unfortunately I’m all out of fucks to give for the week. So you guys will just have to deal with it.

I guess my problem with the book is that it is just perfectly unremarkable. I found it enjoyable, but about on the same level as one enjoys plain oatmeal. It’s tasty, filling and nutritious but not necessarily something you would want to write home about. There is nothing in that novel that either Stross or Doctrow haven’t covered somewhere else in much better way.

What does it mean when you put down a book and have nothing to say about it (either negative or positive)? Does it mean that the author has succeed creating something that is perfectly acceptable? Or does it mean that he or she failed at stimulating your imagination and making you think about things.

Maybe the book is not actually that bad. Maybe it’s me. I admit that I hard really hard time getting into it. Normally I devour most of the stuff by Stross or Docrtorov. I like the writing style of both authors and this book is something in between, which is still quite agreeable. But I just never got to that point where you can’t put the book down because you need to know what happens next. I was always just mildly disinterested in the story: just not enough to stop reading. I think it might be because I just could not stand the protagonist.

And no, I didn’t mind the fact that he/she changed gender like five times throughout the book. That I actually found interesting and unique about the character. It’s a pity that these gender swaps were involuntary though – it would be probably much more engaging to have a story told from the point of view of a truly gender fluid character. I dislike Huw Jones for an entirely different reason: (s)he is a closed minded, technophobic, prejudiced misanthrope who chooses to live a neo-ludite life in a house without electricity. Huw hates the cloud with a passion, despises and distrusts any kind of artificial intelligence and considers anything transhuman to be an disgusting abomination. In other words, Huw is a person I have almost nothing in common, and can’t seem to relate to at all. If we met in real life we would probably instantly develop deep dislike and disdain for each other.

Sometimes you find books that have magnificent bastard anti-hero protagonists who you just love to hate. Unfortunately this is not one of such books. Huw is just lousy, resentful, whiny jerk from the very start of the novel to the very end. I guess the fact that the protagonist who hates all technology gets implicated into, and becomes a major player in a high stakes intrigue concocted by the cloud entities is supposed to be ironic and funny. But it isn’t. Huw is dragged by force from one fun locale to another, and the authors fill his/her life with all kinds of colorful explosions of mind bending and reality altering clarktech which (s)he hates with a passion of thousand suns. Huw whines, complains, then begrudgingly learns to use technology to advance the plot, then discards it with disgust and goes back to being technophobe until the next time. It’s like pulling teeth really – the shtick gets old after the first chapter, and you really want the character to finally get with the program and stop being so backwards. But that never happens.

As a result, it hardly ever feels like the protagonist has any agency. People just drag Huw around, maneuver him/her into an advantageous plot position and just wait until (s)he stops whining. You can of course write a novel about someone with little to no agency, but hat requires a different plot structure. The plot of Rapture always hinges on Huw doing something (s)he is not very keen on, and a lot of the conflict is just watching him/her stall and complain a lot before caving in.

The other thing that slightly bothered me is that the authors got things a little bit too right. For example I think that their the depiction of the cloud is just spot on. It’s basically the Internet as we know it right now, but with people living there. It’s kinda like I always imagined these sort of networks to be like. But Stross and Corry make it extra shitty to make Huw hate it all that more. And that kinda kills it. The glorious cyberspace to which chosen ones ascend to become “weakly god-like” super-entities turns out to be a masturbatory shit hole populated by jerks, and focused on bullshit idle discussions. The whole place is like a message board thread, 7 pages past Goodwin’s Law and still going strong.

Same goes for the depiction of the future of United States. It was both depressing and little too much on the nose. Apparently after all sensible people migrated to the cloud the country was overrun by religious wingnuts. So the nation is an ecological disaster zone, polluted by toxic waste, almost entirely radioactive and overrun by continent sized mutated killer-ant colony. The survivors live under the boot of crazy Evangelical theocracy which is secretly ruled by hedonistic sex cults. Clever? Yes. Accurate? Ouch, its almost too much.

The sharp satire Stross and Doctorow deliver in this novel hit too close to home for me. I can see the humor in it, but it just made me sad. They take all the things I love and enjoy and piss on them relentlessly and with reckless abandon. They rip apart the internet culture, they use Huw to ruthlessly rip on blind technophilia and reckless transhumanism, and they depict the country where I currently reside as a hell hole beyond help and any hope of redemption. It kinda hurts… But on the other hand, it is mostly just lighthearted ribbing, and it lacks impact. If they really leaned into their punches they could have easily ripped my hard up and made the experience somewhat cathartic. Sometimes anguish is good. But Rapture of the Nerds always pulls it’s punches and delivers nothing but mild annoyance.

Sometimes you will read a book, and you just fall in love with the setting. You actually want to go and live in that universe and you start writing notes for a FATE campaign using that setting. This is not one of such books. Sometimes a setting is so twisted, and repulsive that it has the opposite effect: you just love to hate it. And you also start trying to figure out how to convince your friends to play a game based on it. Rapture of the Nerds falls somewhere in between these sweet spots: the setting is kinda cool, but kinda shitty at the same time. It has cool elements, but nothing that would really make it stand out.

The end result of all of this is a book that just doesn’t have all that much of an impact. It’s almost as if the authors couldn’t agree on the tone. Sometimes the book is positively wacky, sometimes it becomes sharp, almost mean-spirited satire. Other times it tries to play serious for a bit and goes for plot twists and late reveals. You will read it, shrug, put it back on the shelf and likely never think about it again. Which is kinda sad considering what it could have been.

This entry was posted in literature and tagged charless stross, cory doctorow, sf. Bookmark the permalink.