First thing I noticed when I started playing Sleeping Dogs was that it isn’t Watch Dogs. It took me a little while to actually realize this because on the surface the games are nearly identical. You run around and open world city as a brown haired dude and you “hack” things with your cell phone. The main difference is that in Sleeping Dogs the steering wheel of the car is mounted on the passenger side because the game takes place in Hong Kong and not Chicago. Also, your brown haired dude is an American of Chinese descent which makes him marginally more interesting than the “epic signature hat” dude from the other game.

The second thing I noticed was that you could customize your outfit, and I immediately knew this game was going to be a blast. I spent about an hour ignoring gravely serious story missions visiting every clothing store in the game to put together a perfect look for my serious undercover policeman hero: 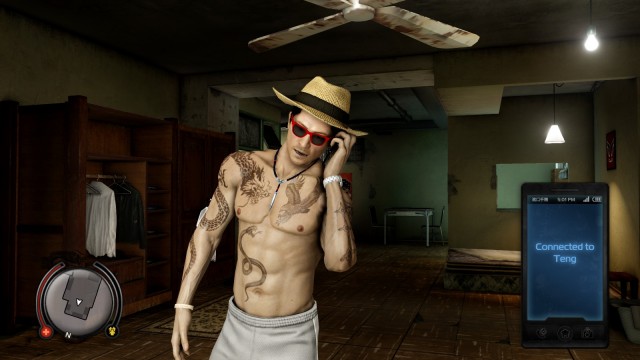 How did the game react to my strange attire that included a shitty straw Panama hat, gray sweat pants, converse sneakers and an ill-fitting pair of pink sun-glasses worn without a shirt? It didn’t. Because outfits in video games do not matter. And so, whenever they let you customize your clothing, and give you a few “silly” options it can lead to unintended hilarity. Like the scene where I took a girl on a romantic evening date looking like this: 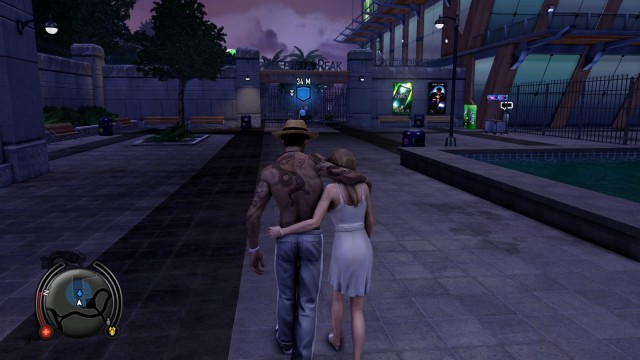 It is probably worth noting that I had to fist fight bunch of dudes on my way to the date, so my sweat pants and panama had some blood stains. But my date said nothing of it. Then there was that one time when I parked a car in the hotel lobby, half-way up the stairway. The NPC’s in the lobby were a little confused and they stared at the smoking wreck of my vehicle for a bit, but eventually they decided to just roll with it. The car stayed in the lobby for another three or four hours reminding me that I as the player character am the undisputed lord and master of this puny universe. 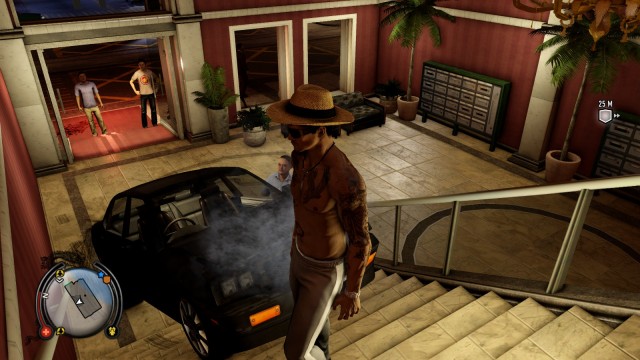 This is where I park my car

At this point, you may be wandering: “isn’t this type of shenanigans precisely what Saints Row games are all about?” and “Aren’t the Saint’s Row games better at player agency, freedom to do ridiculous stuff and character customization?” The answer would be yes to both questions. Sleeping Dogs is neither as customizable not as silly as those titles. It’s actually not trying to be either.

The game actually treats its story very seriously. You play an American-Chinese cop who goes back to the city of his birth for a super-dangerous undercover assignment that has him infiltrate the triads. You start as a street enforcer and slowly work your way up in the hierarchy. In the process you have to make many morally ambiguous choices. Your cop supervisors expect you to obey the law as much as possible, but your gangster buddies demand that you prove yourself to them by being ruthless and uncompromising criminal. It’s not supposed to be silly. But it is, when you’re wearing the right hat.

After being a grunt you start to spend spend a lot of time rubbing elbows with the rich, powerful and dangerous people. For example there is a scene where you are driving around an American “investor” around the town: 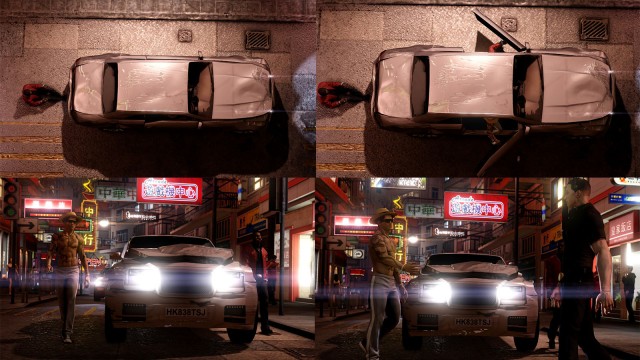 Not as cool as it should be

It is supposed to be really, really cool. The camera shows you exiting the car in slow motion, and you walk around the front and flip the keys to the valet without breaking a stride. But in my game I actually crashed the car a few times before I reached the destination, so it is a steaming wreck. The guy sitting on the ground behind the car is someone I ran over just before the cut-scene was triggered. He was literally thrown up in the air, and landed behind the car. Every bone in his body is probably shattered right now. But no one blinks. No one says a word. The scene plays out as if nothing happened. I couldn’t stop grinning at the ridiculousness of it.

At another point in the game you go to super important meeting that are supposed to be these quaint moments reminiscent of good mafia films, but… Well it doesn’t work when you dress the way my character, does it? 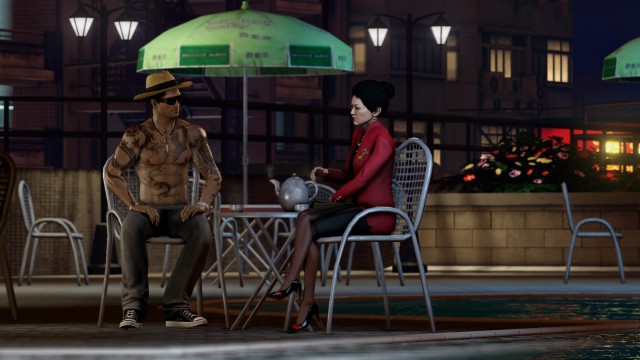 Meeting with one of the triad lieutenants.

Sleeping Dogs does not know it is being silly. It is fantastically conservative as far as plot and story goes. It even includes a pre-fridged woman: the oldest and most popular video game character motivation plot device. I presume that the writers wanted it to be bloody, violent and heart-wrenching and only occasionally humorous. But because I was able to strut around in my sweat pants and panama hat I was giggling throughout most of the scenes. It allowed me to subvert itself. It allowed me to be this silly, off-kilter agent of pure chaos in an orderly and ordinary world. It allowed me to be the one genre savvy character in pulp Gun-fu action story. In a way it allowed me to make it’s story my own, in a very silly immature way. 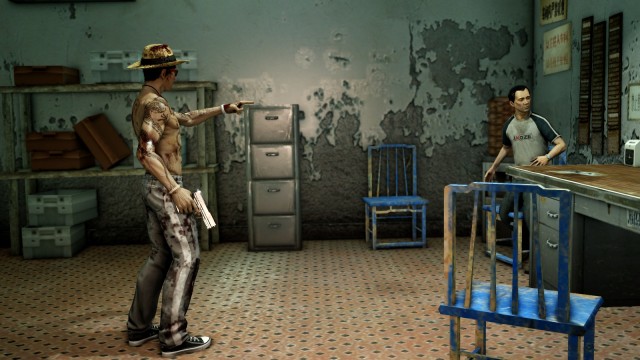 Listen buddy, these stylish sweat pants cost me like $1 at Wallmart and you bleed all over them…

This is probably the sole reason why I spent over 30 hours with Sleeping Dogs but only around 6 with Saint’s Row 3. Because it was exploitable. Because it played the straight man to my wacky comic relief character. This is an important lesson about games and comedy: let the player be the clown of the setting. Being the bumbling, spastic buffoon is a natural state of the player character and working against it constrains player agency.

La Noire tried to do this by limiting your range of movement / interactions and giving NPC’s awesome car dodging skills so you couldn’t run them over… Unless you tried really really hard. In fact, tricking the game to let me to run over pedestrians with my car was probably more fun and more satisfying than “winning” the interrogations. Saints Row did the opposite: it tried to make the player to be the straight man and the hero by skewing the setting toward silliness so that player antics seem pale in comparison to the madness exhibited by the NPC’s. Personally, I did not enjoy that role at all. When all the NPC’s are in on the joke, and you (of all people) are the most reasonable person in the entire game world, the possibility of mischief and misbehavior is lost.

Just let me break your game and completely ruin your story on my own terms. No matter how funny you think you are, or how awesome your plot is, I can make it better by way of silly hats or ridiculously absurd behavior. As soon as I install the game on my computer it is my story, to be experienced my way. If you want your audience to experience the story “as is” without possibility of altering it, make a movie or a series instead.