This was a conversation rolling through my Twitter feed lately: how do we design good web service signup form? One that is unobtrusive, intuitive and inclusive. How many fields do you need? What is the best way to arrange them? What kind of questions are important to ask your users? Turns out that there is a lot of disagreement on this, and a lot of misinformation and false myths floating around.

For example, is this a good sign up form? 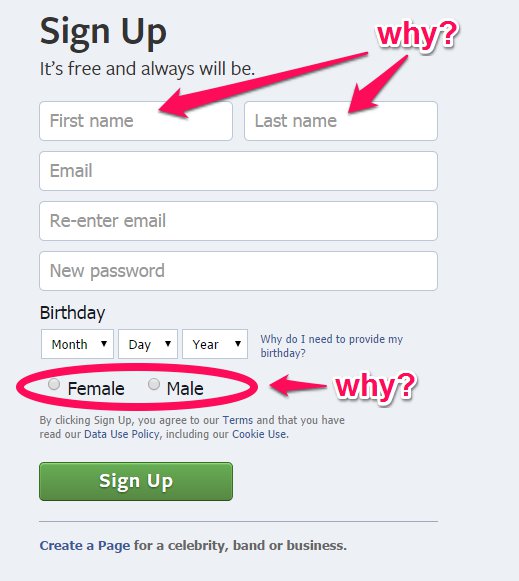 I would argue that it is not great. In my opinion splitting the users name is absolutely pointless. Even, assuming your service needs to use the legal names of your customers (which 99.9% of web services do not “need” to do, they just choose to do so because of reasons) you really only need a single field. This is not a very popular opinion, and a lot of programmers are very, very defensive of their first name/last name split.

I get it, though. I too was taught the mantra of “always be normalizing” when it comes to a database scheme design. The software engineer in me wants (even needs) to have human identity split into two or more clearly labeled forms so that it can be properly sorted. But, asking for first and last name does not work for everyone. As soon as you normalize this way, you are automatically starting to exclude swaths of users whose names do not conform to the particular pattern you chose.

You probably heard of this little factoid: in some cultures you list your family name first, and your given name last. That alone should give you a pause, and make you re-consider using a two field strategy. Some people think that simply labeling the fields as “given” and “family” instead of “first” and “last” will do the trick. I also saw a developer claiming that his app is going to be primarily used by English speaking Americans so it does not matter. But that’s wrong too, because even in that narrow demographic you are going to have a number of people whose names do not fit into the first/last pattern. You want examples? How about Madonna, Eminem, Pink, Xzibit, Nelly, Sinbad, Rihanna, Kesha, Mr. T, Lady Gaga or “The Artist Formerly Known as Prince”. There is a strong history of performers adopting mononyms or stage names which either become their legal names, or at the very least are more publicly recognizable than their birth names.

The fact that I could rattle a dozen names of the top of my head, all of which belong to prominent and recognizable celebrities is a proof that this practice is very much part of western culture. Mononyms and funky stage names are as American as apple pie. So you can’t really use “culture” to defend the over-normalization of the name field, when your own culture has a large group of very prominent outliers.

People make a lot of assumptions as to how people’s names work, but all of them are false. Yes, all of them. The single, uniform field for name is not just something I pulled out of my ass for the purpose of this article. It is actually the best practice recommended by W3C.

Same goes for sex. Why does Facebook think it is necessary to ask its users what kind of genitals they have? I can see how this could be a valuable data point for a dating service, since people use those specifically to facilitate mutual mashing of genitals together. So it makes sense to let people sort and filter potential future romantic partners based on their sex and gender preferences in addition to other criteria. Facebook however, like most social and anti-social web apps in existence has virtually no business to ask this question.

Don’t even try to sell me on “demographics” and “advertising” argument because it is bullshit, at least with respect to Facebook since they track your behavior and browsing habits anyone. There is nothing your sex tells their advertisers that they could not get from analyzing your posts, likes and social graph interactions. In fact, the tracking data is more valuable and more accurate way to target advertising than an empty data point that designates you as “man” or “woman”.

Also, why is it a strict binary choice? I mean, unless you’re building something like Christian Mingle type service (where religious dogma only allows you to recognize an arbitrarily chosen set of genders and appropriate parings), why would you want to wantonly ignore biology? If you are going to ask this question (and you have no business doing so in the first place), why not ask it the right way?

Is the Facebook form asking for sex, or gender? Because I honestly can’t tell? This is an important question to ask because Facebook has weird “real name” policies that could result in the suspension of your account if their support staff determines you “lied” on this question. So what do you put down biological sex does not match the gender you identify with? What if you don’t identify neither as male nor as female? 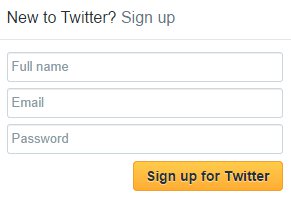 A single field for “full name” and no unnecessary questions about sex and gender. This is how it should be.

My personal rule of thumb for designing web forms: make them Time Lord friendly. Whenever you want to add or normalize a field, think how the protagonist of BBC’s Doctor Who series would fill it out. Your form should allow one to use The Doctor as the single and only personal identifier.

If you keep these things in mind you can avoid common pitfalls of web form design and build signup forms that are not only intuitive but also maximally inclusive.

This entry was posted in programming and tagged web design. Bookmark the permalink.