If you have read this blog for a while, you probably know my opinion of Fantasy genre. For the most part I find the genre to be frequently shallow, sloppy and ironically unimaginative. And yet here I am, about to write a gushing review for what I consider to be a Fantasy novel. Not the standard, medieval brand of fantasy mind you but funky steam punk setting. But since it includes fantastic creatures and magic it still counts as novel fantasy in my book. A steam-punk-tasy novel if you will. Is there a specific name for this genre? If there is my Google fu has failed me today. 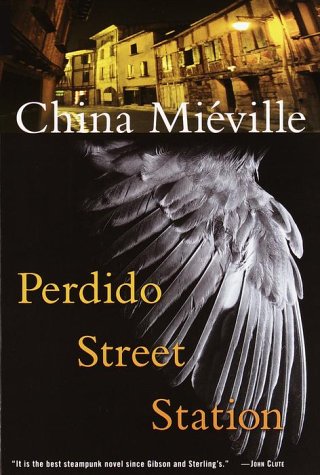 Why do I like Perdido Street Station? Because it is a strikingly imaginative and original book. A lot of times when you pick up fantasy themed steam punk novels (or steam punk themed fantasy for that matter) what you get is Victorian era London with some wizards, Dwarves and Elves forcefully squeezed into the setting. But Miéville’s setting is fresh, and unconventional. He could have easily build the backdrop for his story using the same, tired Fantasy/Steam Punk writers handbook everyone else seems to be using, but he decided not to. He did the opposite: he went out of his way to make his setting to be different.

For one, his New Crobuzon city is not London and does not really resemble it in any way shape or form. It is a sprawling, totalitarian city state existing in a bizarre fantastic world very much unlike Victorian England. The interesting point is that the novel is as much about the city itself as about the characters who inhabit it. Unlike many authors who treat their locations as merely backdrops for their stories, Miéville makes his fictional city one of the main characters. It is a living, breathing place with specific geography, unique architecture, it’s own micro climate and breeds of pests and rodents.

I’m not sure if you have traveled to many big cities – I don’t travel often, but I grew up in one. Each city I ever have visited had a different vibe to it – a specific feel and character. It was something that hangs in the air and permanganate everything. It’s the mixing of the slums culture, the exotic flavors of the foreign quarters and bazaars, the haughty air of the high end boroughs, the ever-present dirt, the smog, the smells, the bird shit on the statures – all of that mixing together to form a flavor specific to that one city. Miéville’s absolutely captures that in his prose. His description of the city’s architectural mess, and it’s people manages to convey this feeling quite clearly. New Corbuzon feels like a real place, while at the same time being outlandish, exotic and fantastic.

Second, while the city is inhabited by many fantastic inhuman races, Miéville avoids the standard Tolkienesque bestiary. You won’t find Elves or Dwarves in New Corbuzon and I’m thankful for that. Not that I have any problem with these standard Fantasy races – they are great for stuff like D&D where they provide you with pre-made character archetypes. But in literature, this often becomes a crutch. When you see the word Dwarf on the page, you already know everything there is to know about this particular character. You know he wears a beard, you know he is probably either a warrior or a smith, you know he loves beer and loud drunken singalong, you know that his favorite weapon is an axe or a hammer, you know he dislikes Elves and hates Orks, you know he is probably honorable and trustworthy fellow, you imagine him having a Scottish accent… The writer does not even have to say one word beyond “Dwarf” and you already will have a firm grasp at who the character is, where is he coming from, his aspirations, morals and etc.. At that point he either has to subvert this archetype, or reinforce it… Either way this is not the best way to create subtly nuanced characters.

Miéville went back to the drawing board and built his fantasy races based on an entirely different set of mythical beasts. He built his insect headed Khepri based on an especially funky member of Egyptian pantheon, his frog-like Vodyanoi on eastern European mythology, his flying Garuda on Indonesian folklore, and his Cactus people on… Fuck… I don’t know – cartoons of cacti with faces I guess.

The point is that these original races are blank slates without any cognitive baggage. They can be described as real people rather than single minded stereotypes. And that’s exactly what Miéville does. He takes a great care not to pigeon-hole his newly created fantastic races. He writes about their culture, their religion and customs but he never tries to define their personalities based on the race.

He lets them define themselves through their actions, the things they say and glimpses at their internal monologues. His characters are interesting and dynamic. They change, they suffer, they overcome adversity – they drive the plot forward rather than being driven by it. They are far from being some cardboard cut-out action hero stand-ins you often see in fantasy. They are not defined by their profession or archetype – they define it.

If you happen to be a fan of Steam Punk, you will likely enjoy this book very much. If not, you still can safely check it out just to see what can be done with this genre. It is thought out, very well written and original novel. It’s definitely worth checking out.