The Scar by China Miéville

China Miéville is probably most known for his oddball Fantasy/Steampunk novels. I reviewed the first one of them Perdido Street Station a while ago. You may remember that I liked it – or rather appreciated it for what it was – a novel approach to the genre. Miéville is doing something interesting – he is trying to innovate in a genre defined by it’s slavish adherence to Tolkienesque standards. He is inventing his own universe full of strange non-humans, none of whom are standard elves or dwarves. And it’s pretty good.

However, in my honest oppinion Miéville shines when he is doing Science Fiction. I absolutely loved his The City and The City and Embassytown novels – both of which were smart, poignant and intriguing – much more than his trademark fantasy books.

The Scar, is another book in the New Corbuzon series – it takes place in the same universe as Perdido Street Statiom but it is not a straight sequel. While it references the events and characters from the first book, it has a whole new cast of characters and a new city.

You see, cities are essentially characters in Miéville’s literature. Perdido had the corrupt, dirty and diverse New Corbuzon. The City and the City had the “cleaved”, space sharing city states. Embassytown had… Well, Embassytown. He spends as much time describing and developing his cities as he spends on his heroes – sometimes more. The Scar is no different – it takes place in Armada – a floating pirate capitol of the world. And as such it is unsurprisingly weird. 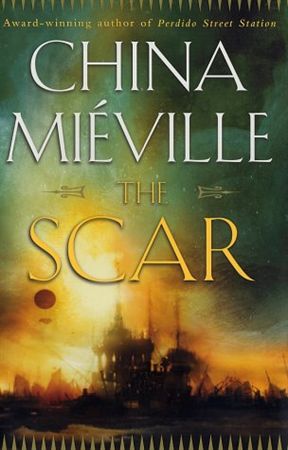 Do you remember that floating town from Waterworld? It’s kinda like that but times a thousand. It is a gigantic city-state composed of thousands of ships, rafts, platforms and random flotsam bound together into a huge metropolis. Ships are re-built and re-fitted as housing projects, gardens, factories and etc. It is not merely a pirate base but a fully functioning, self sufficient mobile city. It has schools, places of worship, universities, parks, theaters, concert halls, libraries and everything else you would expect in a large metropolitan area. While the city profits from piracy, most of it’s citizens are not actually sailors, and never live their floating capitol. In fact, only those who prove themselves to be loyal and trustworthy are allowed to sail the seas and pillage in the name of their home city.

You see, a large number of Armadans are not natives. While many were born there, more are “press-ganged” captives. Whenever Armadan pirates take over a trade ship, they execute high ranking officers and take the crew and passengers captive. They are then given lodgings and jobs in the city that fit their past professions and skills. They are not allowed to leave, but are otherwise free to live the rest of their life in the city, as long as they abide by it’s laws. For some – like New Corbuzon slaves and criminals “rescued” from being transported to hard labor camps, this is an improvement and they welcome their piratical overlords and pledge their loyalty to them.

Here is the thing about Armada: despite it’s compulsory citizenry, it is otherwise quite democratic and liberal. Instead of being ruled by some despotic pirate king it is divided into independent “ridings” – each with it’s own political system, militia and philosophy. There is a democratic riding, a theocratic one, one ruled by a merchant king, one ruled by a vampire who extracts a “gore tax” from his citizens and etc.. Citizens pay taxes and must abide by the decrees of the riding where they live, but are free to move at any time. Furthermore, Armada has no aristocracy and recognizes no class. All citizens are equal, and their position in the social strata is mostly based on merit. It is a place where vampires can openly walk the street without prosecution, and remade can become respected politicians or administrators.

While ridings quarrel, play political games trying to outmaneuver and out profit each other they never really stoop to physical force or military conflicts. While internally fractured and conflicted the Armada is unified against outside enemies.

Our protagonist is Bellis Coldwine, a New Corbuzon native who is running from the state Militia due to her ties to Isaac Dan der Grimnebulin (the protagonist of Perdido Street Station). Isaac is on the lam after the events of the first book, and the state is determined to find him – and so all his friends start to disappear. Rather than risk a close encounter with the New Corbuzon militia, Bellis leaves for the distant colonies. Her plan is to rough it out for a year or two, and then catch a ship back to her home city when things quiet down. Unfortunately, Armada expeditionary force boards her vessel, executes all the high ranking commanders and takes the crew and passengers as captives. And so she becomes an unwilling inhabitant of a strange alien city full of pirates.

And she is not happy. While the prospects of ever leaving the city look bleak, she decides not to give up. She is determined to escape no matter the odds. And the odds improve as she discovers there is something big and nefarious going on in Armada. There is something underneath the city – enormous structures tucked away under the hulls of major ships, camouflaged and obscured by hexes. There are legions of scientists building strange machines, and pouring over ancient texts, searching for something. The rulers of the Armada have some plan, but it’s details are hidden from the citizens.

The Scar has a colorful cast of characters, and reveals a lot of new and interesting details about the “Bas-Lag” setting. Miéville does a lot of world building, introducing new races, new lore and new mysteries to his universe. It is fun and interesting adventure romp. Unfortunately it is nowhere near as poignant and riveting as Perdido Street Station. Part of the problem here are the characters.

Bellis is just not as easy to identify with as Isaac. She is cold, calculating, selfish and proud. She is careful not to form attachments to people, and she makes a point of giving all Armadans the cold shoulder as an act of defiance. Compare this to the New Corbuzon scientist from the first novel who was driven by passion: he was passionate about his work, made genuine connections with his clients and always spoke his mind, even if it offended people. He was a crude, rude ball of passion – driven, ambitious and in love. Bellis is the exact opposite – she is aloof, detached and somber. The side effects are that for her, the stakes are never high. Bellis only cares about herself and so she is never really in danger of losing someone. And when she does lose people, she is more bewildered that she actually misses them, than distraught.

Other characters are no better. Uther Doul is essentially a superhero (or rather a super-powered henchman). Silas Fenec, a spy deals in deception too much to serve as a point of view anchor. The engineer Tanner Sack and his young friend Shekel are the closest we get to actual likable protagonists, but Miéville keeps them in the background and focuses mainly on Bellis.

Granted, you can make a cold, calculating and aloof character interesting. Take the TV-series Dexter for example: he is a bloodthirsty, emotionless sociopath. And yet, when put in a right social context and with right framing devices, the audiences can fully empathise with him. And while he may or may not care about his family, the audience does, and becomes invested in that relationship. The Scar just does not have that.

So to summarize: The Scar is much more colorful than Perdido Street Station, but doesn’t have it’s emotional impact. The characters are weaker, and less identifiable – especially the protagonist. None of the side characters has the pathos of Yagharek – the wingless Garuda exile, and some (like Uther Doul) even take on annoying Mary Sue qualities as the book goes on. It is a weaker book, but for what it’s worth, its still entertaining.