The Future is Here: Google Glasses

Few weeks ago I have reported that we are skipping Halting State and going into Rainbow’s End mode with Augmented Reality contacts becoming commercially available around 2014. It turns out that the good folks at Google decided jumping ahead of the schedule like that is unhealthy, and so they decided to implement Halting State technology long before 2014.

Guys, I don’t think you heard me. I said:

I don’t know about you, but for me this is a dream come true. I always wanted to have a HUD. When I was a kid, I would walk around pretending to have a military grade head’s up display that notified me about diagnostic state of my hidden cyborg weapons and locked onto potential targets on the street. And later this year I might be actually able to buy internet enabled glasses that will make this a reality. 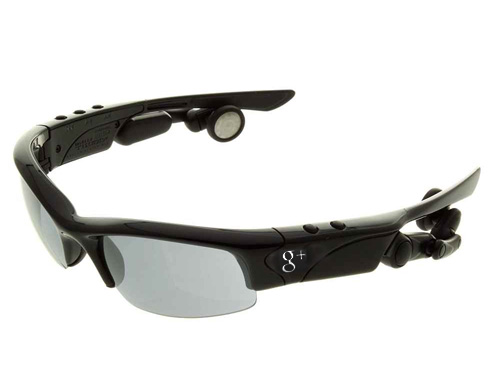 The Scientific American article I linked earlier was exciting, but it talked about new technology that may or may not become a commercial reality. But here we have Google, developing technology that it is determined to bring to the market. This is something that is happening, and I couldn’t be more excited. The question is whether or not this will catch on. Are we ready for AR glasses?

I mean, I know I am. I was born ready. But is the average consumer ready and willing to invest in such a gadget. Or will it be viewed mostly as a gimmick. Would you buy one? How much would you be willing to pay for it?

Question number two is whether Google can actually market these things. Google is great at distributing software and services, but they don’t necessarily have a great track record when it comes to hardware devices. The original Google Nexus phone was a really good device but suffered from the lack of availability on the major carriers that were reluctant to ship it. Because of that, sales suffered and it was discontinued. Let’s hope they can do better for these magical glasses.

Question number 3 is whether or not the app writers will embrace this device. The glasses will be useless if there is little to no software that exploits it. We don’t want these glasses to be the next Wiimote – a gimmicky device that few developers know how to use well, and mostly include a simple shake action as an afterthought. Instead we want to see an explosion of free AR software that will make these glasses indispensable.

Lastly, it will be interesting to see if Apple takes the bait and makes their own glasses to implement the iPhone. They could play it either way. If they choose to ignore the glasses they may potentially put a damper on the AR market. A lot of developers may become discouraged from developing AR apps for Android knowing that they would never be able to create ports for the more profitable Apple App Store. On the other hand, proliferation of AR software may be a kick in the groin that finally knocks Apple from it’s dominant position as the mobile market leader. If they don’t jump on it, they might give Google a dangerous advantage. Especially if Microsoft makes their own glasses for the Windows Phone – and they are so desperate to carve even the tiniest sliver of the mobile market for themselves, that they might actually do it.

If Apple comes out with their own glasses then the world may change forever. If both relevant mobile platforms have this technology, and are competitively trying to market and develop it, we might see it explode and completely revolutionize mobile computing.

We truly live in interesting times. I honestly can’t wait to get my hands on affordable, and functional AR glasses of some sort.


22 Responses to The Future is Here: Google Glasses