I often rag on Fantasy for being a genre populated solely by novels derived almost directly from either the writings of Tolkien, Robert E. Howard or hybridized from both. The fact that I am critical of it, does not mean I don’t love the genre. There is something to be said for immersing oneself in the familiar pseudo-medieval world full of magic of mythical creatures. I guess part of my slight disdain for Fantasy literature is my gaming background. I played lots of fantasy themed campaigns in various settings, under various systems – from Warhammer FRP to GURPS Fantasy and everything in between. I played fantasy themed tabletop games, Tolkien based collectible card games and etc. I inhabited these worlds, and I know them inside out. I can write essays about the similarities and differences of Elves in various D&D based settings as compared to say Warhammer Fantasy Elves or Tolkien Elves. So when I pick up a book, and see a writer try to treat me to his version of Elves/Dwarves/Orcs I can read between the lines, and usually trace his inspirations to particular novel series, or game franchise.

I really do appreciate when authors diverge from the common fantasy archetypes and build non-Tolkienesque bestiaries. Great example of this is Perdido Street Station which comes with completely unique menagerie of sentient races, and original mythology. That’s the sort of thing I enjoy – stories that break the mold and try something different. Either that, or shake up and subvert the established archetypes.

I touched upon this subject before when I wrote about the Family Life of Orcs. Orcs are the ubiquitous fantasy antagonists that die by the dozens at the hands of the noble heroes – so my idea was to invert this dynamic. Portray Orcs not as bloodthirsty monsters, but as territorial tribal people just trying to live their lives, raise their children and expand their influence. They are not inherently evil, but simply different – they don’t speak the common tongue, they do not understand human culture and customs. It was an interesting thought exercise, so I figured we could do this again.

This time though, I want to go further and play around with their biological and psychological makeup. Let’s say that you don’t want to make them more likable or easy to empathize with. Perhaps you want them to be bloodthirsty, remorseless monsters. How do you sell that though? I mean yes – the rulebook, bestiary or whatever supplementary lore you are using will probably tell you that Orcs are evil by nature. I don’t like that assumption. I think that the whole idea of “evil aligned races” is a storytelling crutch. A person can be evil – I buy that. But a whole race? How do chaotic evil creatures even form a stable society?

There are way around this conceptual issue. For example you could claim that Orcs have magical origin and blame their alignment on some evil deity or sorcerer. But then you are just trading off one tired trope for another (wizard did it). So I don’t like this approach either.

You could also do what Warhammer universe did and simply claim that Orcs are not as much evil, as they are stupid and infantile. Warhammer Orcs are actually sentient fungi (no, I’m not shitting you – look it up) and they don’t really have much going on in the brain department. They don’t have much of a society as they have a horde, that accomplishes things mostly thanks to inertia and forward momentum of mob mentality. The brighter individuals can wind up the horde and direct it’s energy toward a target. Without a leader, their society fractures and falls apart due to a never ending maelstrom of in-fighting. I’m actually somewhat fond of this interpretation.

But let’s say you want to do something else. You want the super-competent Tolkienesque Uruk-hai rather than comic relief Orcs of Warhammer universe. Let’s play around with this concept and come up with way to justify their behavior without simply saying “they are evil”.

Our new Orcs are going to be a humanoid race that has evolved alongside (or apart of) us, but initially filled a different ecological niche. They spent their formative generations in different environment, responding to different outside pressures and thus have different adaptations. It stands to reason that Orcs would be morphologicaly and neurologically different from us. Their minds would very possibly work quite differently from ours.

Here is a real world example – chimpanzees are often considered the intellectuals of the animal kingdom. They are our fastest and brightest students, learning to resolve logical puzzles and matching patterns faster than any other of our Great Apes cousins. But there is one area where they do worse than, for example, orangutans: self awareness. Chimps often fail to recognize themselves in the mirrors, and fail tests that require counter-intuitive logic. Orangutans are less logically inclined and slower learners, but have more developed self awareness. They are more like us in that aspect – they understand mirrors, they are able to empathize and figure out puzzles that baffle chimps. They seem to have more developed higher brain functions, but since these are slow costly (from purely biological standpoint) to run, they under-perform on pure pattern matching intelligence tests, than the animals that devote more circuitry to just stimulus processing rather than implementation. There is a difference between raw intelligence and self awareness. 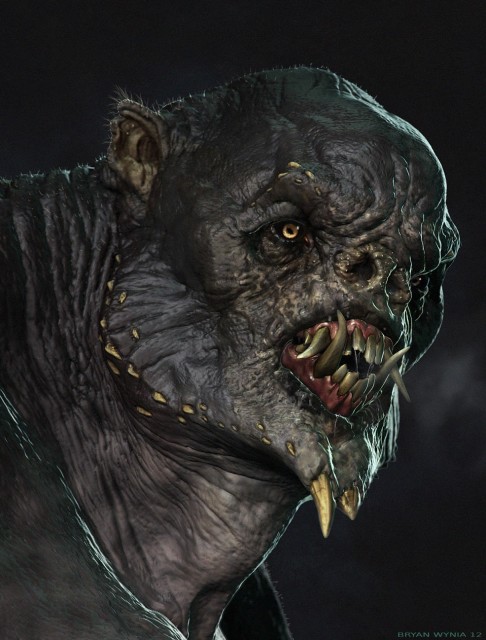 This concept is actually one of the core themes in Blindsight by Peter Watts. He really sells the idea in the novel, and has lots of support for it in the footnotes. The basic idea is that our self awareness is an evolutionary fluke. We got it for free because it was dragged into our genome, linked to some other trait that was heavily selected for back in Pleistocene, and it is mostly baggage that holds us back in terms of raw intelligence and performance metrics. And as evidenced by experiments with Chimps intelligence and self awareness are not as closely linked as we usually assume. Honestly, read Blindsight for a long form explanation – it is a fascinating book either way.

Here is how all of this applies to Orcs. Let’s imagine a race which evolved high functioning intelligence, but very little self awareness. They can use tools and build shelters but create no art. They form social groups, effectively hunt in packs and perhaps even have a functional language but never develop a culture. They are not introspective. They do not attach importance to the concept of self. They are driven mostly by instinct. They are fast and very adaptive – their agile minds driven in large part by the animalistic, reptilian brain that we buried under lots of gray matter. Think about how your brain acts during a fight-or-flight reflex – your body moves on its own, without cognition, without conscious thought. That’s how Orcs are all the time. Driven, motivated but not aware. Completely free of existential issues and high concepts such as love, loyalty, freedom. But blessed with an over-abundance of purely functional intellect that can be used for developing better weapons, better hunting strategies and etc… Unlike animals they are extremely adaptive – they invent new tools and alter their behavior and lifestyles in response to changes in their environment.

Does this sound like Orcs yet? It sounds like them to me. And they are not evil at all – they are just wired differently. Perfect antagonists who can be complete and utter bastards, without actually needing to have some convoluted motivation or alignment related excuse.

Imagine this race of intelligent but instinct driven monsters stumbling upon human settlements. They would be dumbfounded by our art, by the our useless, functionless things we surround ourselves with, by our flowery language full of useless gibberish. They would probably recognize our intellect, but see us as slow, vapid, amorphous space wasters busy processing meaningless cognitive garbage. They would be faster than us – their whole lives are one fluid motion. No thought but action. No reflection, just forward movement. They work faster, breed faster, build faster and react faster to environmental changes. They are better in every way except one – they have no culture, no concept of beauty, and no empathy. They have no need for such things. On the surface they would appear to us as barbaric, inhuman beasts organized into some military society.

They would probably be aggressive, expansive and completely uninterested in trade or peaceful coexistence. We would not get along at all. In fact, they would flood us in waves that coincide with their breeding seasons. Each year they would pump out more and more babies that would reach maturity in record time, quickly exhaust food resources and be forced to move in huge armed throngs to richer and more fertile lands – those controlled by humans.

You could build a whole campaign around exploring this idea. Have players learn the ecological dangers of allowing Orcs to breed freely without inhibitions. Or how their brutal raids on human lands are essentially their instinctive solution to overpopulation. Their armies either get wiped out, or conquer enough territory to support the next generation resolving the food and space shortage issues one way or the other.

What do you think?