Only Forward by Michael Marshall Smith

Sometimes you read a book and it completely blows your mind. That’s what happened to me when I read Diaspora or Line of Resistence. Only Forward is not one of these books.

There are books that simply tell a great story in a very compelling way like Lord of Light, The Sparrow or City at the End of Time. Only Forward is not one of these books.

Sometimes you read a book, and you hate every single page. That’s what happened to me when I read Capacity. Only Forward was not like that either. It is something else altogether. 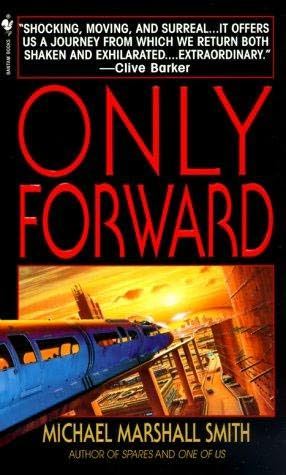 Only Forward by Michael Marshall Smith is probably a book unlike anything else you have read before. And I don’t mean that it is an experimental, odd-ball performance piece like House of Leaves. It is a very traditional, old school novel. The strangeness comes from the way it is plotted. Not necessarily the plot itself but the way in which it unwinds. And therein lies the difficulty of reviewing it. The more I tell you about it, the less you are going to enjoy it. In a way, this book is all about the journey you take with the narrator through weird twist and turns the plot takes. It’s all about marveling how the story flips and flops around every few chapters keeping you guessing as to what exactly is the whole thing about.

I purchased the book on an impulse. It is yet another one of those times when Amazon recommendations came through for me, providing an astonishingly accurate recommendation. So in a way I went into it blind, which is probably the best way to go. For a regular novel, I could tell you the genre, the setting and give you some idea of the story without spoiling anything. But this doesn’t necessarily work for Only Forward because, true to it’s title, the book has this kind of forward momentum that takes it away from the original premise very quickly.

It starts as sort of a noir detective story set in an odd SF setting: a sprawling futuristic city that is divided into self-sufficient, self governing neighborhoods that cater to very narrow special interest groups. There is neighborhood for people who like to live in total silence where noise is outlawed, one which is populated solely by cats, one which is a big country club, one which is a lawless hell-hole where rival gangs can have all-out drug wars. The narrator seems to be some sort of a detective who gets hired to find a missing person…

Unfortunately the narrator, who also happens to be the protagonist, is completely unreliable. He constantly lies about his past, only to reveal the truth much later. He omits important bits of the story so that he won’t have to reveal more things about himself and he fully admits it. You quickly realize he is not really a detective at all, and the case was given to him because he possesses a very special set of skills. What these skills are, and why they are important for this case? Well, he won’t reveal that until much later in the story. But for the time being he keeps doing detective like things, chasing leads, investigating and etc…

Then the bottom of the story falls out, and it turns into a rescue expedition into a very peculiar, separationist neighborhood that cut itself off from the rest of the city and forbids any communication in and out of it. Then as soon as you come to terms it is no longer a detective story, it switches gears again and starts messing with the genre and the setting itself. Every time you think you figured out what this book is actually about, Michael Marshal Smith suddenly switches gears and goes somewhere else entirely. But the consistency of writing and narration ties it all together so neatly you barely notice when these shifts happen.

It is a neat book, full of little surprises. Once it is all said and done, it might seem a bit underwhelming. The bits near the end of the book which reveal why the protagonist is so “special” didn’t really wow me that much. It’s probably because I expected something more science, whereas Smith went more the fiction route. But I found the storytelling entertaining and engaging enough to keep reading till the very end. Smith tells the story in light heated, witty way with his tongue permanently planted in his cheek. The world he creates is wonderfully wacky and silly but he never really seems to cross over into full slapstick or satire. It’s one of these books that probably won’t make you laugh out loud, but it will keep you smirking as you read it.

It is not mind blowing, life changing or anything like that. But it is a fun read. If you in the market for something to cleanse your pallet between reading hard SF or serious heart wrenching stories this is probably a good book to pick up.


2 Responses to Only Forward by Michael Marshall Smith