China Miéville’s Bas Lag series is somewhat unique in the realm of fantasy literature in that it keeps me coming back for more over and over again. I am not a huge fan of epic sagas or cycles spanning countless tomes. My favorite SF writer Jacek Dukaj once told an inteviewer he was not interested in committing sequels because it would feel artistically dishonest. That it would be like milking commercial success of a previous novel, and cranking out an easy, semi-recycled, focus-tested product instead of taking new risks in an effort to write something new, original and thoughtful. Many authors find a setting and characters that resonate with fans and make a career out of iterating over the same handful of themes and ideas across countless sequels, zeroing in on that exact sweet spot between fan service and high stakes melodrama. And while there is nothing wrong with that (and there is definitely market for it), this is not exactly what I look for in a book.

A reader lives a thousand lives before he dies, said R. R. Martin in his fifth book about the same group of characters inhabiting the same functional universe, and I keep wondering whether or not it is at all worth sacrificing seven of mine to see his epic through to the end, when it will be televised by HBO anyway. I could easily spend that time exploring other worlds, other ideas and other stories instead of worrying whether or not Tyrion is going to get brutally murdered at some wedding (this is not a spoiler, at least not that I know of). The mere fact that I care about Tyrion and Danny and bunch of other characters (most of whom are dead now) is an undeniable testament to Martin’s craft. He found our literary g-spot and he is working it raw (albeit very slowly). God bless him for that. I hope he lives a hundred more of valve-time years and writes 15 more books for us. But as great as his series might be, it isn’t about anything in particular. Entertaining and captivating and heart breaking: yes. But new installments don’t necessarily explore many new depths.

Miéville’s fantasy series is different in that each book about something. Each one has a particular theme and set of ideas it tries to explore. While the setting is recycled, protagonists are not and so each novel comes with a new set of personal journeys and character arcs. Each book has something different to offer. Perdido Street Station was a fantastic steam-punk thriller with a really cool nightmarish monster, and a deliciously tragic story of a man (well Garuda but whatever) guilty of an esoteric crime seeking to escape the punishment he actually deserves via arcane magical science. The Scar was a pirate adventure story with a big treasure hunt, a larger than life sea monster, floating city and explored bizarre, exotic cultures. Iron Council is probably the most ambitious and the most literary installment in the cycle because it deals with a rather loaded topic: inequality and class warfare. It is a novel about revolutions and social upheavals. 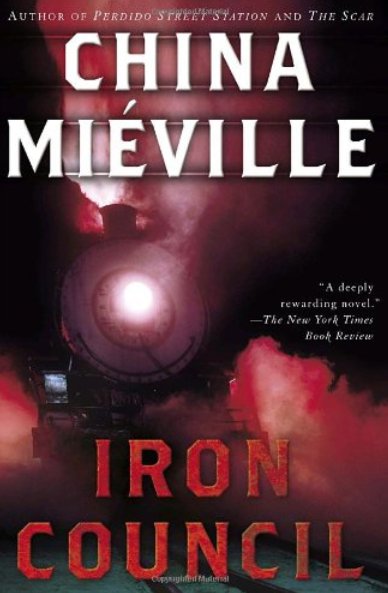 Perdido touched upon New Corbuzon’s corrupt political system, and The Scar did introduce the readers to the plight of the setting’s subaltern underclass: the Remade – men and women marked for life, and stripped of human dignity and human rights as punishment for crimes both real and imaginary dealt out by the ineffectual, corrupt and dysfunctional bureaucracy. Iron Council however brings these themes to the forefront and builds the story around them.

It wasn’t so long ago that young idealistic dreamers, united by their dissatisfaction by the growing wealth disparity and the progressing annihilation of American middle class went out on the streets and occupied Wall Street in a peaceful protest accomplishing a whole lot of not much at all. Iron Council’s Ori is one of such idealists who realizes peaceful resistance and activism and other ways of affecting change by working within the system are only effective when said system isn’t completely broken. He is tired talking about how bad things are and he wants to start doing something to change it. He seeks out and ultimately joins a fringe resistance group which seeks to disrupt and ultimately overthrow the government by force. And so begins his ascension through the ranks of New Corbuzon’s most infamous terrorist cell. While he thinks that their cause is just and while he finds camaraderie among his fellow freedom fighters he is plagued by doubts and appalled by the amount of collateral damage his group is causing.

Parallel to Ori’s story we also get to follow Judah Low, a restless adventurer and a master golemist who, spurned by the sad state of affairs and social unrest in New Corbuzon sets out on a journey to find the titular Iron Council. Said council is a New Corbuzon legend: a symbol of equality, solidarity and a big middle finger directed at the corrupt government. The city’s most ambitious railway project was hijacked when a group of low wage rail workers and remade slaves rebelled against poor work conditions, overthrew their taskmasters, defeated the City militia army sent to quell their rebellion then stole the train and much of the rails driving off to some unknown lands and creating a society of their own. It became New Corbuzon’s Tiananmen Square – an uplifting symbol to the people and a shameful embarrassment to the government which officially claims it never happened. If anyone can find this legendary secret commune, it is Judah Low because he was once counted among the council’s leaders and political instigators. He hopes that by finding council and convincing it to come back, he can help to unite New Corbuzon’s fractured underclasses and create a spark of an open rebellion.

One can’t help but notice that the novel is somewhat topical. The book was published in 2004, but Miéville seems to have successfully tapped into the global sense of dissatisfaction regarding the income inequality and accumulation of wealth and power that started to skew former democracies toward oligarchic like systems. That pressure has later erupted into events like the Arab Spring, the Occupy movement and myriad of other bigger and smaller inequality related protests. Reading the novel now, one can see that the author has extrapolated on these notions and created microcosm exploration of social upheaval brought about by crushing inequality. Granted, we are talking about a revolution in a steam-punk/fantasy pseud-democratic-but-not-really New Corbuzon here. A city populated by frog-men, bird-men, sentient cacti in which corrupt judges can order your left ass-cheek to be magically fused with an angry porcupine as a punishment for littering. It’s not like this is a strong one to one metaphor for something particular. But it does make you think.

It does put you in the mind of the people involved in such revolts. It does a great job showing both the hope and hopelessness of fighting against a seemingly immovable unjust system. And the ending is as poignant and as fitting the story as it is unsatisfying. But most importantly it is rather unique, and very different from all the other novels in the same series. It is probably the most mature of the three Bas Lag books I have read so far, and one with a most diverse cast of characters. It is one of the few SF/Fantasy titles I have read this year that features not just prominent gay but also bisexual characters. Especially that last group has virtually zero representation in popular culture, and especially in SF and Fantasy. So it is nice to see Miéville making bisexuality the least interesting aspect of a vibrant and dynamic protagonist such as Judah Low.

I think Iron Council is definitely worth revisiting Bas Lag universe, even if you are getting tired of the setting. I don’t know if this can be said about all Miéville’s books set in the universe but Iron Council was definitely not an attempt to grind that commercial sweet spot. Personally I prefer his one of SF excursions like City and the City or Embassytown but I must admit that this novel might be the most serious and thoughtful I have seen him so far.

This entry was posted in literature and tagged bas lag, china mieville, review. Bookmark the permalink.