I have not seen Watchmen in the theaters when it first came out because my friends suck. I can hardly remember last time I was this excited for about a movie. Actually, scratch that – I can. Last time I was getting so worked up while watching trailers I was back in high school and Phantom Menace was coming out. I can distinctly remember watching the trailers featuring the Darth Maul combat scene and literally bouncing up and down in my chair. Back then I still thought highly of George Lucas. Everyone did. Little did we know, that the whole prequel trilogy will be a steaming pile of shit – a mere ploy to sell Happy Meal Jar Jar and Annie the Teenage Jedi toys to Burger King joints all across the nation. None of us could predict that Lucas either has grown senile, stopped caring or both. Or maybe worse, he never actually had any talent and the quality of the original trilogy mostly imparted by the people who worked with and around him, and massaged his vision into something workable. When Lucas decided to shoot the prequels however he was already a legend of the industry – and no one actually dared to say no to him, or correct his jarring blunders. 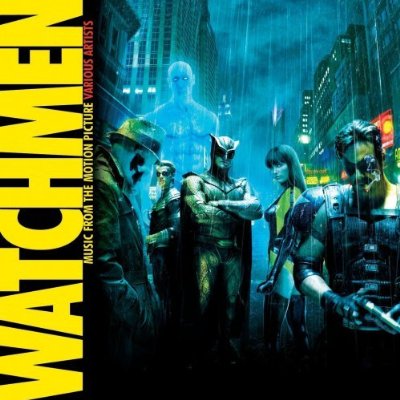 I wasn’t worried that the Watchmen will be a Phantom Menace type of disappointment. I don’t think anyone can beat George Lucas in the area of raping my childhood and shattering my dreams. I was more afraid it would be a Spiderman type of disappointment. Great trailers, decent story, competent cast, warm reception by critics, favorable rates given out by fans – and a total, and complete shit of a movie as far as I was concerned. And then two horrible, maddeningly awful sequels – as if that first atrocity was not enough.

As you can imagine, my wait for Watchmen was filled with uneasy anticipation. I was excited, but also very afraid that the film was going to suck. When the first very positive reviews hit the press, I was glad to see it was not a total blowout but still cautious. The first batch of reviews is always positive – at least here in US where journalistic integrity is sort of an indy, “retro” trend.

I only let out a sigh of relief after I read that overwhelmingly positive review by Will Wheaton! All I really wanted to hear was that the film was faithful and respectful of the source. And Will swore by the “Beard of Zeus” that it was, and that counts for something, doesn’t it?

Sadly I never got around to actually seeing the movie on the big screen. Couldn’t find anyone who both shared my passion for the graphic novel and didn’t actually take off from work (or cut classes) to see it on the opening day. I didn’t want to go alone, and so I missed it. I regret it now. It would have been worth it!

The film was basically everything I hoped it would be – a very faithful adaptation. The Watchmen is a special case among the superhero comics in that it is a closed, one off storyline rather than a meandering cycle. It has a begging, and end, a very well defined plot, characters and art direction. There is only one version, and one vision you need to conform to. And Zack Snyder conforms to it absolutely.

Visually, the movie is jaw droopingly perfect. The panels from the comic book are painstakingly recreated on the screen, with minutiae attention to detail. Just like he did in 300, Snyder almost seamlessly lifts the still frames and converts them into moving pictures with such skill and ease you can hardly believe your eyes. If you are a fan of the graphic novel, you will get butterflies in your stomach each time Snyder nails yet another pivotal, iconic scene.

Of course, all of this wouldn’t work without the right cast. I must admit that I was blown away by the brilliant selection that was made for this movie. Not only do all the actors look like the characters they are portraying, they also are very competent in their craft. I loved Jeffrey Dean Morgan as the Comedian, and I think that Patrick Wilson nailed the strong and yet dorky Night Owl. I can’t really say that Billy Crudup look the part, because Dr. Manhattan was fully animated so the likeness was guaranteed. But his voice seemed perfect for this character. The calm, collected, quiet and detached tone just seemed right. When I first heard him speak, I was like “OMG! Yes, that is how Dr. Manhattan would sound!”

Jackie Earle Haley was a brilliant choice for Rorschach. I just wish he didn’t try so badly to sound like the fucking Batman. I’m pretty sure he strained his vocal cords something fierce to sound like that, and it wasn’t even that good. I always imagined Rorschach having clear, strong, confident voice. None of that scratchy throat thing. But still, he did a hell of a Job bringing this character to life – you can’t deny him that. What’s more, he did not mind to have his face obscured by the mask most of the time as required by the role, while his co-stars were getting all the face time. This sort of thing is rare in Hollywood. Most actors who play fully masked superheros can’t wait to rip that thing off. Compare this to Spiderman in which Toby McQuires headgear rips to shreds in every single scene.

I really can’t say enough good things about this movie. It is done well, directed with painstaking attention to detail, and great reverence for the original story. The cast is terrific, and the story… Well, the story was great to begin with, and it is re-created on the screen very faithfully. There are shortcuts of course, and Snyder did make some omissions but that is to be expected. My only gripe with Snyder is that after being almost slavishly loyal to the original, he decided to alter the ending. If I didn’t know about this switch, I would be totally blindsided by it. The change is subtle, and logical and works well within the context. I can sort of see how this ending could even be considered more sensible. But still…

Ok, here is the thing: I have seen a city vaporized by pseudo-nuclear explosion about 100 times already. Just about every catastrophic movie has this grand, destructive sequence in which some large city is reduced to a big crater. But city being smashed by a bloated carcass of a lovercraftian alien squid monster is something fresh, original and twisted. So I’m a bit disappointed that Snyder decided to go with something more conventional. On the other hand I can see where he was coming from. The squid thing would be a WTF inducing moment that would probably be ripped apart by the critics. Making Dr. Manhattan the ultimate enemy (instead of some unknown alien force) gives the story a neat twist, and makes the Billy Crudup’s character a bit more tragic figure.

This switch is subtle, clever and reasonable enough not bother me that much. It did not ruin the movie – if anything it added to it in a positive way. I forgave Peter Jackson most of his alterations, and so I forgive Snyder his machinations. At the end of the day, he did a hell of a job. I can’t imagine this movie being done better. It exceed my expectations, and I can honestly recommend it as one of the very few graphic novel adaptations that are truly worth watching.

This is why I’m surprised at all the negative reviews I read recently at Roten Tomatos. There are a lot of people fiercely bashing this movie out there. I saw several reviewers actually complain that Snynder was to loyal to the source. They whined that he didn’t change the movie to fit his own vision. One reviewer actually recommended changing the setting to contemporary US and replacing the cold war with global terrorism and Iraq situation. Can you imagine that? That would be a true Hollywood style travesty! If Snyder would do such a thing to my favorite graphic novel, I would put him on my shit list along with Uwe Boll and Michael Bay.

Snyder deserves a tip of a hat for respecting the source material and caring more about creating a faithful adaptation rather than on leaving is own creative mark on the project. This movie was not about reinventing the Watchmen, but about translating the still pictures into moving ones. And as such, it is brilliant. Complaining that it doesn’t diverge from the source enough is like whining that translator didn’t add any original chapters while working on a foreign novel. It is just silly.

You could complain that the film was a bit rushed, and that it omitted some important bits. But to actually shoot it frame, for frame and cover all the side plots and nuances of the original Snyder would probably need to make it a two part deal, or even a trilogy. We only got one movie though, and it is still impressing that he still managed to hit all the major plot points, and include most of the iconic scenes.

If there is anything worth complaining about, it is probably the musical score. They say that you never actually hear music in a well scored movie. It blends in seamlessly, enhancing the experience. Watchmen does have couple of scenes in which the choice of music is a bit odd, if not jarring. Let me put it this way – the Smashing Pumpkins song that was featured in the trailer was much better, darker and more climactic that anything you actually heard playing during the movie. Did the musical choices ruin my experience? No. They merely made me rise my eyebrow once or twice, but it is a minor flaw in an otherwise excellent movie.

I love to bash bad movies on this blog. It makes for funny and entertaining posts that are both fun to write, and fun to read. But I do give credit where the credit is due. And Watchmen does get my seal of approval. It is a great graphic novel adaptation with a few tiny flaws that do not detract from the final product.


8 Responses to Watchmen (The Movie)