The other day I was re-watching Scott Pilgrim vs The World which, in my opinion, is one of the most wonderfully wacky movie that seems almost engineered to ensnare, mesmerize and capture the hearts and minds of my generation. I already wrote one review of the movie so I don’t want to repeat myself again. The reason I bring it up is because of the record store. 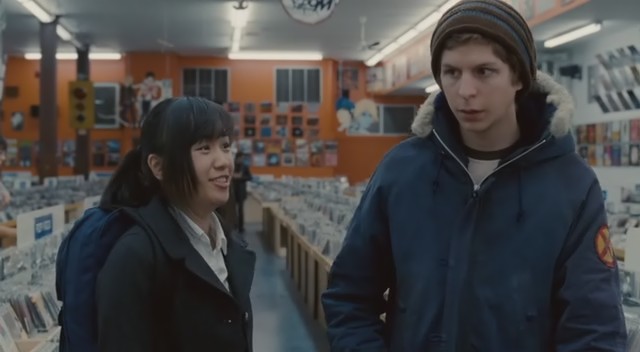 There are multiple scenes in the movie that take place in a the Sonic Boom record store which apparently used to be a real location in Toronto. Watching the characters browse the records stacks I could not help but to remark on how quaint and archaic this whole ordeal looks today. Record stores like this are mostly a thing of the past these days. The ones that still exist are typically in dire straits or barely making any profits. They are in the same boat as brick and mortar book stores and video rental places: no longer needed and therefore no longer profitable.

Some people are upset by the slow decline and death of the old fashioned record, video and book stores. I am not because I don’t think they were ever that great. Of course not everyone shares this opinion. Connor Simpson recently wrote an interesting column for The Atlantic Wire in which he bemoans the loss of the brick and mortar stores as a loss of opportunity for random impulse purchases. He asks:

My answer would be: never. I don’t impulse-buy things in brick and mortar stores. Whenever I pick up a physical object it is because I genuinely need it. I can’t tell you how many times I have stood in a book store, reading the back-cover of a book and flipping through its pages only to put it back on the shelf. For some reason the concreteness and solidity of a book prevents me from buying it on a whim – especially if it fails to capture my attention in the first few paragraphs. When I’m at a book store I will always read the first few pages to get the feel for the book, and more often than not I put it back in disappointment or disgust. When I shop online, I typically don’t have this luxury but also the lack of physical concreteness makes it easier for me to just add a book to my cart based on the back-cover blurb and 2-3 positive reviews I skim through.

When I was in high school it typically took me hours of laborious browsing through the stacks in order to pick out one or two decent books. These days it typically takes me 5 minutes to order ten of them on Amazon and I can almost guarantee that every single one of these books is better than the shit I was able to find at my local book store back in the day. Why? Because Barnes and Noble in my town had one isle in the farthest corner of the store where they would dump science fiction, fantasy and comic books all mixed together and mostly out of order, because the teenaged employees were kinda ashamed to stack books in that area.

Not to mention that whenever I brought the least shitty available SF, Fantasy novel or manga to the register I typically had to put up with the judgmental sneers and the eye rolling of the girl behind the counter. People often talk about how Amazon reviews can never replace knowledgeable book sellers, but we never had any of these. These quaint, magical book stores run by bibliophiles probably existed somewhere out there, but they were definitely not in my town which had Barnes and Noble on one side and Borders on the other. These gigantic chain book retailers, both conveniently attached to highway exits made it impossible for any mom and pop book stores to exist for many miles in every direction. As you would expect, these corporate run chains were staffed by underpaid corporate shills, and local part-time underage workforce composed of morbidly bored high school students. In other words it was as if they were managed by Ron Swansons and staffed by April Ludgates (but less lovable and much more apathetic and reluctant to actually do any work or care about customers).

We also had a few record stores in the neighborhood, but they were also supermarket sized corporate behemoths that stocked only the most popular pop music to the exclusion of everything else. The fun record stores with stacks full of niche music genres and quirky staff members with eclectic music tastes existed only in movies, and perhaps also in “The City” which for us, car-less and broke teenagers might as well have been a foreign land even if it was in a driving distance. Suburbia was always the land of plenty, as long as you only wanted plenty of mass-market, lowest common denominator crap sold at premium prices. The big chains completely failed to cater to the niche interests, primarily because the long tail economics that give online vendors such as Amazon such huge profit margins, simply do not work for brick and mortar establishments.

This has not changed one bit. Well, maybe the customer service has improved now that they are in the death throes, but for the most part the big chain stores still suck very much in terms of choice and variety. Few months ago a friend of mine found herself in a slowly rotting carcass of Barnes and Noble upon discovering that behind the endless Nook displays they still had a few shelves of genuine paper books she decided to buy a few. Seeing how my birthday was coming up she decided to give me a call and ask me to give her a few authors/titles so that she could pick out something I would like. I gave her a list of about a dozen books from my running to read list. I think some of these titles were somewhat obscure like Celestis, Inverted World and The Sparrow. Unsurprisingly the book store did not have any of these. So I revised my list deciding to keep it down to more mainstream authors like Neal Stephenson, Neil Gaiman, China Miéville, but once again the books I wanted were not there. What the store had to offer was row upon row of Star Wars and Star Trek novels, and about every possible Tolkien related book that could be adorned with movie stills on the covers. No wonder their business model is doing to hell in a hand basket – they have absolutely nothing offer to someone who is not even remotely interested in paperback mystery novels or paranormal teen romance.

For comparison, the other day I bought about about six books on Amazon some of which were used novels by Gregg Egan. I recently reviewed his Diaspora and absolutely fell in love with his brand of ultra-hard science fiction. Do you know how I discovered his work? Via the Amazon recommendation algorithm which looked at my previous book purchases and decided this somewhat less known author would be right up my alley. And it was absolutely right.

Unfortunately, bulk of Greg Egan’s work was published in the 80’s and the 90’s. This means that these books are currently in limbo also known as the copyright black hole. Rebeca J. Rosen wrote an excellent article explaining this phenomenon, but I think the point she is making is best explained by this graph: 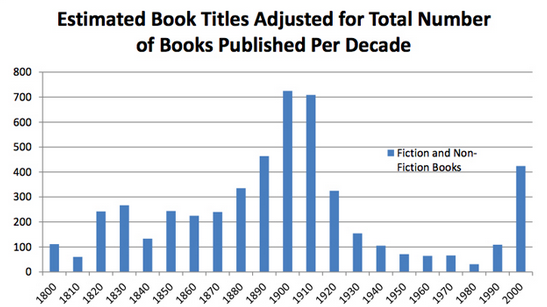 Most publishers are interested in either brand new books or very old books. Because of the red tape, royalty re-negotiations, copyright ownership issues and myriad of other problems, everything that is more than a decade old, but not yet in Public Domain is simply not worth their effort. As a result, books from 15-20 years ago typically vanish from book stores. And yet, I was able to buy some of these elusive novels because Amazon hooked me up with used book salesmen via their Amazon Market program.

Simpson claims that the internet ruined the analog serendipity. That the act of randomly stumbling onto something obscure but awesome while browsing through record or book stacks is now gone forever:

There is nothing left to “discover,” because the Internet already knows all. If you “find” a new bad thing, it’s likely on a blog that millions of other people read daily. If you “find” a new movie, like the somehow-growing-in-popularity Sharknado, it’s because you read one of the millions of blogs that paid far too much attention to a movie that, in the old days, would have gone straight into a straight-to-DVD bargain bin.

But I think this line of reasoning is not only wrong, but also silly. I mean, how does he think these obscure records or movies got into the brick and mortar store to begin with? Someone had to invest into these things, publish them, pay to ship them to the stores. The owner of the store have had to consider that particular title profitable enough to leave it on the shelf instead of tossing it out and replacing it with something better. In brick and mortar establishment even the bargain bin shelving space comes at a premium.

You weren’t “discovering” anything back in the day either. It probably felt like you were, but you weren’t. The internet is just allowing you to easily find and connect with all your fellow travelers. Occasionally something goes viral, but so what? Yeah, sometimes it sucks when a funny joke gets overtold, but hey, that’s life and it happens all the time. Simpson mentions Sharknado as if it came out of nowhere. The truth of the matter is that Sharknado is the culmination of decades of crappy cult SciFi (now SyFy) movies.

You know what? He is absolutely right. Record and book stores are not places for truly random finds. The only things you can find there are already moderately commercially successful products that had industry backing. If you want to revel in true obscurity and find things that could never see the light of day without digital distribution platform, the internet is the place to go. It is the place where you can find a self published Science Fiction gem such as Metamorphosis of Prime Intellect by Roger Williams. A book that no traditional publisher wanted to touch, but which was once upon a time featured on Slashdot, and which to this day keeps cropping up on Reddit every few months always gathering positive reviews and causing interesting discussions.

Compared with the wealth and diversity of crazy shit that is available on the internet, the narrow selection of mostly mainstream commercial products available in the traditional record and book stores seems completely unimpressive.

It’s actually quite funny that Mark mentions Digital Mumbles in his blog post as one of his resources he used for finding weird, awesome and obscure music. I actually know this blog too, but I found it through a series of semi-random stumbles across the web. Mumbles used to be on a let’s play series hosted by a guy who did that LoTR web comic which I found while browsing some D&D related blog which was linked somewhere in the rpg.net forums. Tell me more about the art of random find Mr. Simpson.